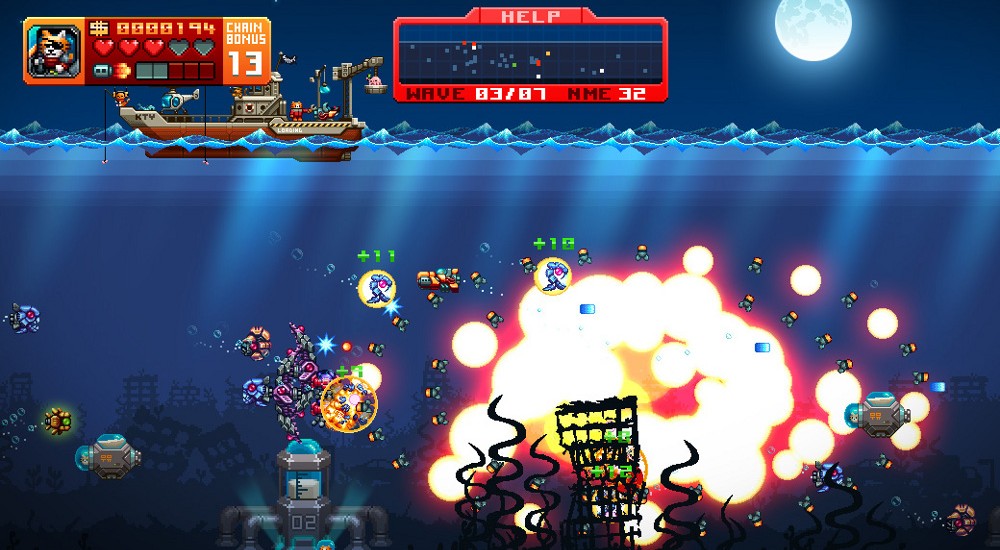 Aqua Kitty - Milk Mine Defender has hit Steam, and it's obviously the best action game to feature both cats and submarines. As a nice bonus, you and a local friend get to blast through mechanical sea monsters together. Nothing says "co-op" like kittens on the sea floor!

A worldwide milk shortage has forced the cat population to overcome their fear of water and head to the seas. There are massive deposits of naturally-occurring milk deep under the ocean, because where else on this green, mammal-filled planet would you find milk? Outfitted with the finest submarine technology the feline species has to offer, dive under the water and get to mining! Said "mining" happens to be remarkably similar to the old Defender arcade game, though Aqua Kitty spices things up with upgrades, power-ups, and SNES-inspired graphics. Just like mom used to make.

Waves of enemies get predictably more difficult the further you progress in Aqua Kitty. That's where your ultra-talented local co-op buddy comes into play. The game's optional multiplayer allows a friend to join in to shoot all the things that you don't shoot. The perfect addition to the retro-feeling game. Almost makes you feel like you're standing in a dark arcade with a sticky joystick and quarters lined up beneath the screen.