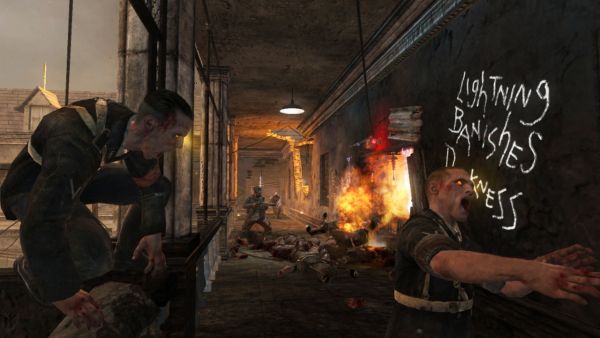 The previously-announced downloadable content for Call of Duty: World at War is coming to fruition. In fact, it's been confirmed for a March 19th release.

Included with three new multiplayer maps will be an all-new Nazi Zombie arena, this one based on the popular "Asylum" map. The new arena is called Zombie Verruckt, and joins Nacht der Untoten as the more worthwhile co-op expeditions in World at War.

There will be a new gameplay twist: players will start Zombie Verruckt on opposite sides of the map and must not only survive the first waves alone, but must work their way toward each other in order to band together for the later, more difficult waves.

Furthermore, unlocking doors will allow access to generators that power various zapper machines and soda vending machines throughout the map. The zapper machines will provide better protection, but at the cost of much-needed points. The soda (called "Perk-a-Cola") machines vend perks that are designed to help you survive.

Finally, the zombies will be coming from you not only through the doors and windows...but also up from the ground and by smashing through walls! Sitting in a corner too long may be an invite to have the back of your neck bitten out.

Unfortunately, pricing is not yet confirmed, and neither is a PC version release date.

Click the "Source" link for the full GameSpot article, screenshots, and a full trailer that will leave you craving more Nazi Zombie survival action.