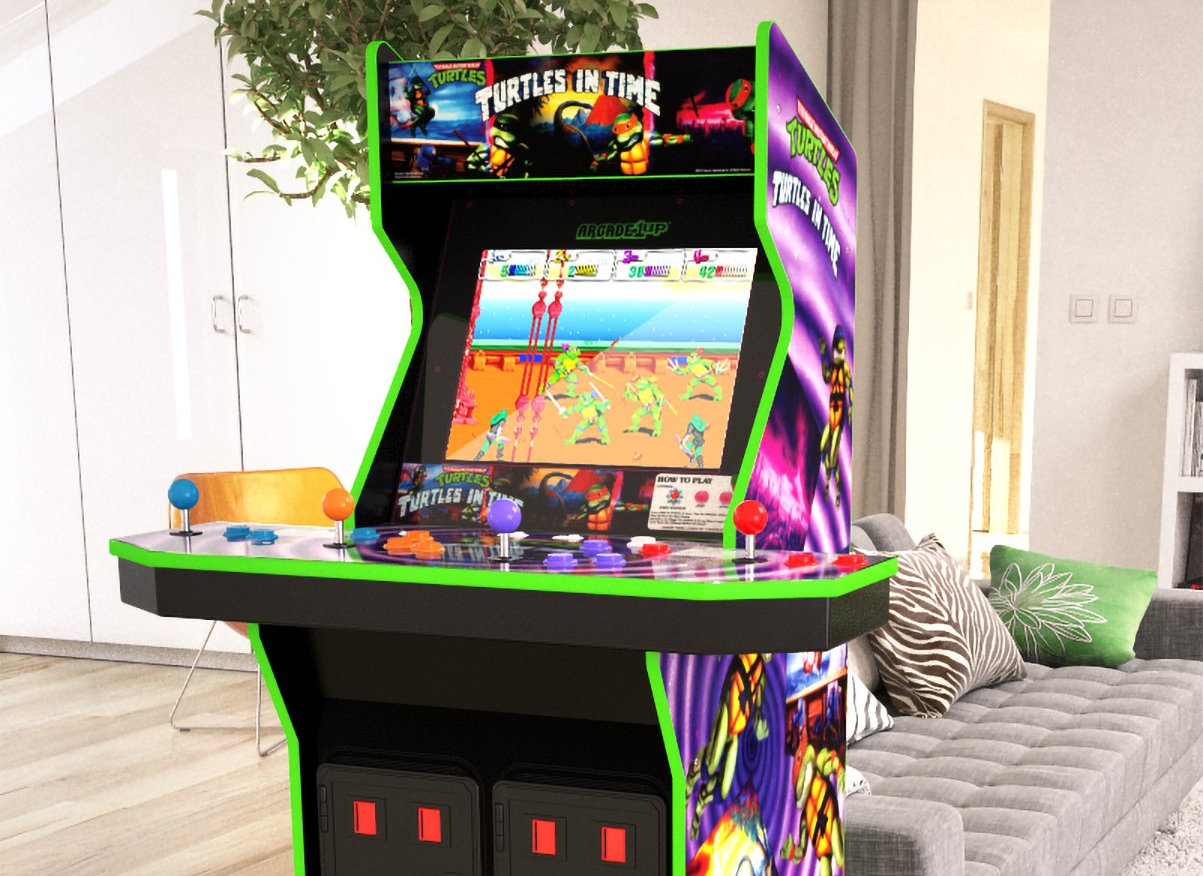 Arcade1Up has made it possible for nostalgic gamers to build their own arcades at home thanks to its ever-growing line of 3/4-scale arcade cabinets. Today, the company announced a Teenage Mutant Ninja Turtles: Turtles in Time cabinet as well as the Street Fighter II Big Blue Arcade Machine, which counts a handful of co-op classics among its roster.

Gamers who keep up with the arcade-at-home scene will know that Turtles in Time was already included on the Teenage Mutant Ninja Turtles cabinet that Arcade1Up released in late 2019. I own that one! The new cabinet is essentially a reskin of the previous one, swapping the cabinet art to the (much less attractive) Turtles in Time arcade artwork. No new games appear to have been added, so just Konami's two original 4-player Turtles beat 'em ups are included. However, the cabinet does bring some new features to partially justify its higher price tag, including online co-op via Wi-Fi, a light-up marquee, and a light-up control deck protector. As for the Street Fighter II Big Blue Arcade Machine, it's modeled after one of Capcom's "big blue" style of arcade cabinets. This will be the third distinct Street Fighter II cabinet design released by Arcade1Up, but the new Wi-Fi online multiplayer and the games list make it the most exciting iteration so far.

The bolded titles feature cooperative multiplayer. That includes Knights of the Round, a beat 'em loosely inspired by Arthurian Legends (and originally 3-player in arcades), Eco Fighters, a side-scrolling shoot 'em up, and Muscle Bomber Duo, a tag-team upgrade of Capcom's Saturday Night Slam Masters wrestling game. Hopefully, all of the games on the Big Blue will support online multiplayer, not just the fighting games. Today's cabinet announcements (which also include a "Class of '81" Ms. Pac-Man and Galaga-themed cabinet) follow the announcement of an Arcade1Up The Simpsons cabinet earlier this week. The product page for The Simpsons was taken down about an hour after going live, so the status of that cabinet remains frustratingly unclear.

Both Teenage Mutant Ninja Turtles: Turtles in Time and Street Fighter II Big Blue are expected to retail at $599, making them the most expensive Arcade1Up cabinets so far. They have no official release date, though retailer leaks indicate a likely October or November release.