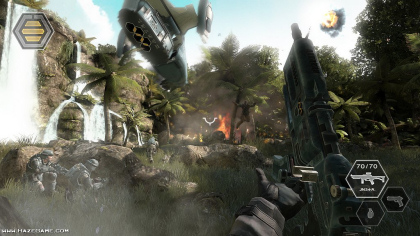 Haze was released last week and featured an integrated 4-player co-op mode.  And while normally this would excited us greatly, it appears as though the reviews have been less than favorable.

We still hope to bring you a proper review of the cooperative mode of Haze, but in the meantime here are some highlights from around the web.

The game ramps up the challenge during co-op play, and considering the horrendous AI, that's a welcome change indeed. Vehicle sequences are all the better for having a buddy join you...however not every level is suited for cooperative shooting. Some scripted sequence...are at complete odds with the existence of another player, as if the possibility wasn't considered when the level was designed.

...having three real friends in the campaign is much less aggravating than the gaggle of idiots you get in the single-player...and there's even four-seated vehicles to zip around in (though the vehicle control is stiff and not nearly as smooth as in other co-op vehicle games like Halo).

For all of the single player issues that continually crop up within the game, there is one small shining spot, which is (co-op). This can sometimes make single player a bit more interesting, because you can rely much more on your friends to watch your back.