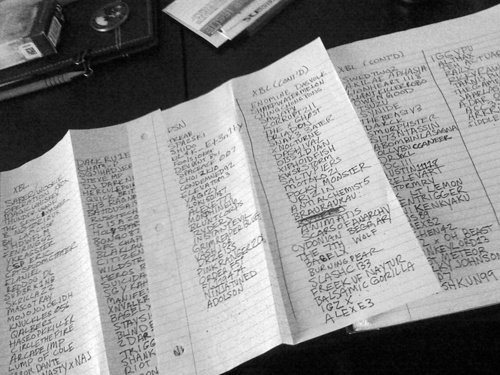 See that list up there?  That's all the people that Gearbox employee Mikey Neumann needs to play co-op with come Borderlands launch day.  Why?  Mikey offered, via twitter, to drop some awesome loot for anyone that preordered the game that day and posted proof of it.

How many folks made the list?  Mikey stopped after about 200 names, and has had to turn down any folks still attempting to hop on the train.

"That's dedication," Neumann said. "I also had a few people buy multiple copies on the same platform for friends. I might give those guys a few extra pieces of loot, but I like to think they're all getting special treatment in a way."

You might think since Mikey is on the dev team he has this easy, that the loot is just a simple magic trick for him to generate.  Not so, he needs to go out and find it all himself.

But again, "That's sort of the whole bitch of this thing, we'll actually have to collect the loot," he said. "All game rules are final, so to speak. I've already asked off of work and I still plan to play with these people. Maybe I'll just get really drunk every night so I'll be extra fun to play with. I'll probably be trying to hand out loot in ODST or something and not realize what's wrong."

Thankfully, despite some trepidation on Gearbox's part once Neumann decided to pull this stunt on his own, they've offered to help him.  Co-op on so many levels, Borderlands comes out on October 20th.