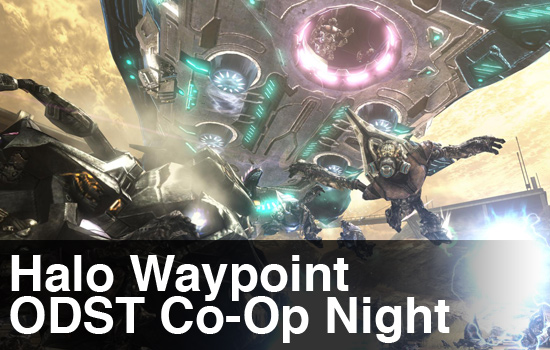 I know what you're thinking, "But this is the second time Mike's posted an ODST-related This Week in Co-Op!"

I'll admit you're right, but this was special.  Really, really special.  You see, it was our first Official Halo Waypoint Co-Op Night, and we were tracking high scores in Firefight.  You'll also learn a very valuable lesson in why you should probably think twice before you ask for my help.

With Jason and Nick in tow and forumer Bakken Hood tagging along, we decided to play around on Lost Platoon, which if you're not familiar is the Firefight map with the most vehicle content.  For fun, I decided that I would spend pretty much the entire match (one that turned into a three-hour marathon!) driving the Warthog.  Seriously, look at this snapshot of my Service Record:

My #1 overall "Tool of Destruction" is the Warthog (out of all the Firefight matches I've done so far), and this was the only time I ever stepped behind the wheel.  With Jason playing gunner, we prowled the map looking for any tasty Covenant to plow and spit hot lead into.  After several sets/rounds, things got a little rougher, but we settled into a rhythm and managed to take everything out.

A good halfway through our match, Nick got separated from our group and needed help! A few Brutes had him in a crappy situation, so he called out for us to come extract him and perhaps take some Covenant down in the process.  Well, let's just say that things didn't go exactly as planned...

I can only hope you all take this lesson to heart. The gallery below is full of screens from that round, captured artistically by our good pal Jason.