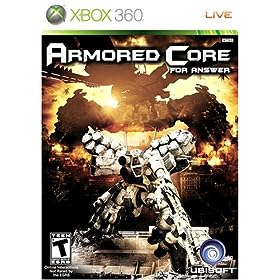 It's a double shot this week of co-op goodness.

First up, the biggest release, is Rock Band 2 on the Xbox 360.  Owners of Microsoft's console are treated with a month headstart on their rocking skills with this 4 player co-op title.  With over 80 new songs, and compatiblity with ALL of your DLC and MOST of your Rock Band 1 songs, this game has some serious legs.  Also, both the new wireless drums and the new wireless guitar should be out

It's also worth mentioning that this Thursday is our Co-Op night for Rock Band 2, so we hope to see you there!

Second up is one that originally slipped through our cracks, but was recently found.  Armored Core for Answer is a brand new Armored Core title; and the first Armored Core title to feature Co-Op.  This 2 player title features drop in and drop out support for online play through the entire single player campaign...nice!  That game hits both the Xbox 360 and PlayStation 3.