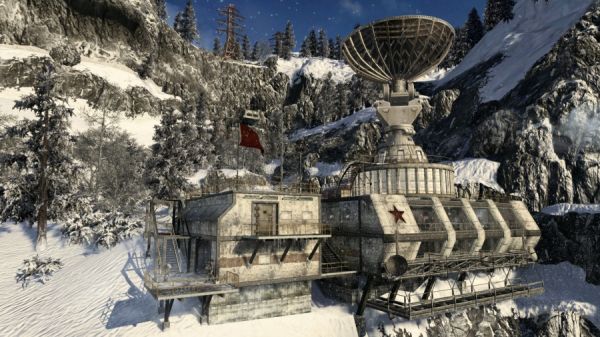 Does this remind anyone else of Inception?

Call of Duty: Black Ops has already proven that it can print money for Activision.  The game must have completed enough challenges to achieve the "Print Money Pro" Perk, because it's about make a lot more.  New DLC titled First Strike is due out February 1, 2011.  According to ComputerandVideogames.com, the DLC will consist of four new multiplayer maps and one new zombie map.

Two of the maps will be based on the Hong Kong and the Arctic Circle levels of the single player campaign.  The other two maps will find players murdering each other around the Berlin Wall and a hockey arena.  Violence?  At a hockey arena?  Bizarre.  Let's hope that all four maps are available in the co-op friendly Combat Training.  Details are scarce on the zombie map, but we all know that mode is co-op all the way.  Oh, and PlayStation 3 owners, there's a catch.

The First Strike DLC will set you back 1200 Microsoft Points.  There's no reason to translate that into real money because, well, here's the kicker:  It will be a timed exclusive to Xbox LIVE.  PC and PlayStation 3 players can expect it at a later date. How much later is unknown, but let's hope it's soon.  We all know that Activision hates PS3 players, but this is just rubbing salt in the wound.  A giant, watermelon-sized wound.

If you do want to start saving your nickels and dimes for the eventual PS3 and PC release, it's going to be $15, or 300 nickels, or 150 dimes.  Figure out tax on your own.