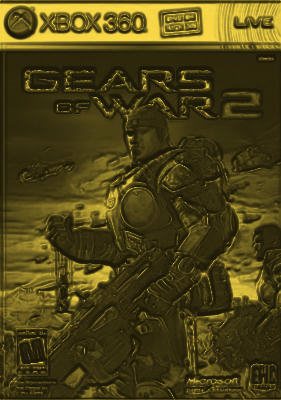 Gooooooooooooooooooooold.  Smoke and a pancake?  CoG and a Lancer?  Yes folks Gears of War 2 has gone gold.  The sequel to the highest rated co-op game on this site will hit store shelves on November 7th.  Perhaps you and your co-op partner should start training now, we have the perfect way to start, with our Gears of War Co-Op Night!

Until then there's plenty to do including unlocking the mystery of the CoG Tags, and if you haven't already, preordered your game through Amazon.com to support Co-Optimus!  If you feeling particularly adventurous, perhaps you should get your own Lancer!

Curious about what else is going on until the launch?  Hit the Read More link for the full press release.

“After two years of pouring our heart and passion into ‘Gears of War 2,’ the team is immensely happy with what we’ve created,” said Epic Games Design Director Cliff Bleszinski. "This is Epic’s best work yet, and we can’t wait to see the response from fans and newcomers to the series alike.”

“Gears of War 2” tells the story of humanity's last stand against the nightmarish, underground Locust Horde, and is the follow-up to one of the most popular Xbox 360 games in history. “Gears of War 2” is rated “M” for Mature by the ESRB and will be available exclusively on Xbox 360 with an M.S.R.P of $59.99 for the Standard Edition and $69.99 for the Limited Edition.

With just 28 days until the worldwide launch on Nov. 7, fans can immerse themselves in the “Gears of War” universe through a new experiential Web site, a “Gears of War 2” video documentary series, a “Gears of War” comic book series, novel and special merchandise:

Fans should continue to visit gearsofwar.com for more news and announcements as release day approaches.