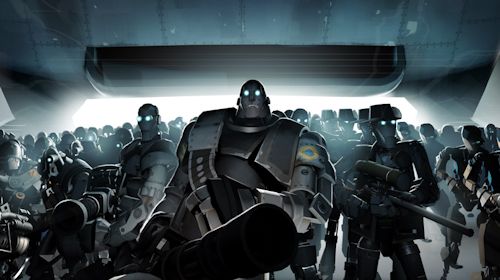 Team Fortress 2 is an incredibly popular game from Valve that has had pretty consistent content updates for the better part of the last 3 years, and I don't just mean the hats.  Now the game is getting what some might consider the biggest update since release - and entire new "faction" of of characters have joined the game.  Except these aren't Reds or Blues, rather these are machines and it's time to team up with your friends against them in a survival mode.

Mann vs. Machine is a new co-operative game for Team Fortress 2 that lets you and five friends wage a desperate battle to stop a lethal horde of robots from deploying a bomb in one of Mann Co.’s many strongholds. Take advantage of breaks between waves to upgrade your abilities and weapons. Survive all the waves in any of a variety of missions to earn incredible loot.

There's very few details regarding the game mode as of now.  We do know there is at least one map supported and it appears that the robots are modeled after each of the game's current classes.  We're going to assume the game supports 6 players in co-op, since we've got 6 classes of characters and that's showcased in the teaser trailer.

The free update is scheduled to go live on August 15th.