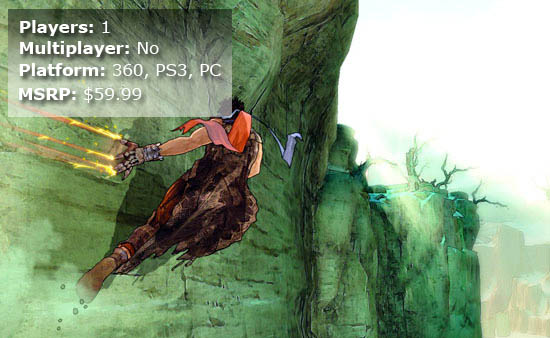 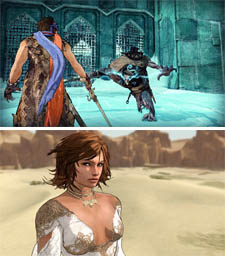 After imposing what I like to refer to as “The Darkening” upon the Sands of Time trilogy, Ubisoft rightfully decided that the series needed a reboot, and what a glorious job they have done! Taking visual cues from the works of Hayao Miyazaki and control philosophy from Assassin’s Creed, as well as liberal doses of Ico and Okami, the game is a joy to explore. Graphically, especially from an artistic standpoint, this game stands alone. Vibrant, painterly colors explode from your screen as you explore the fantasy kingdom of the Auhra.

Gone is the time reversal of the Sands trilogy. In its place is Elika, your partner throughout the adventure. Whenever you are in mortal danger, Elika will step in and save you, the animation of which you will quickly realize is replacing your standard “reload from checkpoint” mechanic. As you effortlessly maneuver from platform to platform, you will often use Elika’s magic to increase the length of your jumps or make use of magical plates to traverse great distances.

Combat is most definitely not the star of the show in Prince of Persia, nor should it be. All of the fights are one-on-one affairs, and usually boil down to recognizing your enemy’s pattern of attack, and dialing in a combo of attacks that, while laced with visual flair, can become quite repetitive.

Ultimately, your enjoyment of this title will come from how much you buy into the world, your desire to explore every nook and cranny of the environments, and your attachment to the Prince and Elika. Theirs is one of the best videogame relationships I’ve seen in a long while, and I look forward to seeing where this series takes them.