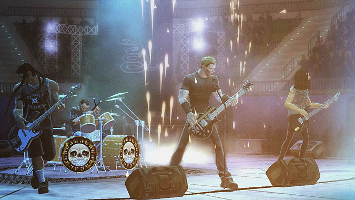 We here at Co-Optimus generally prefer Rock Band to its older brother, the Guitar Hero series.  That doens't mean we aren't stoked about the upcoming Guitar Hero Metallica.  Due the first half of 2009, and available for Xbox 360, PS3, Wii,  and the venerable PS2, GH Metallica features a mix of Metallica songs (dur) as well as a few other bands.  The latter include the Foo Fighters, Queen, Samhain, and Alice in Chains.

The game will be built upon the Guitar Hero World Tour platform, allowing a vocalist, two guitars, and a drummer to all head bang co-operatively.  Probably the coolest feature?

You also can add a second pedal (sold separately) to propel double bass drums as Ulrich does. The game takes its cue from Metallica's ferocity. "It's a couple grades harder than Guitar Hero World Tour," says lead designer Alan Flores.

Double bass pedals?  My legs hurt already!  Looks like I'll be buying more parts for my fake plastic instruments, AGAIN.  We'll keep you informed about this title, for sure, hut for now, check out a few rumored setlist tracks after the break.