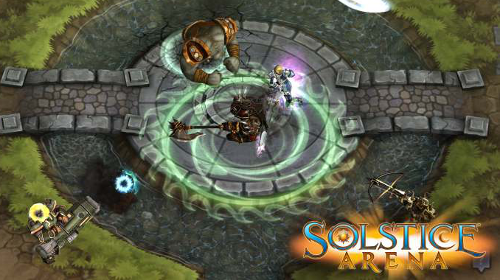 After getting acquired by Zynga in the fall of 2012, development studio A Bit Lucky has finally unveiled its next project. Solstice Arena aims to bring the fast-paced combat found in the multiplayer online battle arena (MOBA) genre to phones and tablets, all without sacrificing gameplay depth or graphics quality. Battles will be three on three and feature full online support, because six people using one phone just isn't fun.

To shrink a complex game into a mobile package, A Bit Lucky has made some tweaks to the design. The most obvious one is that each session lasts less than ten minutes. When you're in the bathroom, any longer than that and people start to get suspicious. Three main modes of play are planned, including solo vs. AI opponents, co-op teams vs. AI, and player vs. player.

The dev team emphasizes that Solstice Arena won't be one of those mobile games that pesters you with in-app purchases and freemium garbage. Instead, Solstice Arena is free to play and "fair to play", meaning you have to earn your upgrades, not buy them. No farming, just fighting. Feel free to use that catchy little tagline, A Bit Lucky!

Not much information has been released about Solstice Arena, but any attempt to bring a more satisfying co-op mobile game to the world has our attention.