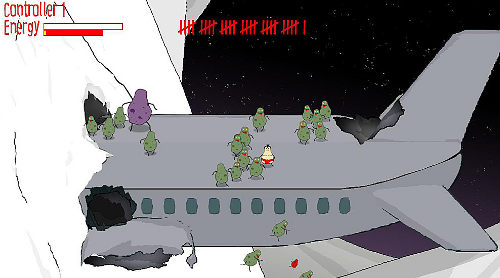 Indie studio BitMaverick recently unleashed Pushmasters on Xbox Live Indie Games, a co-op arcade game that's all about love and flowers and cats and stuff. Kidding, it's actually a game about shoving everything off of rooftops, rockets and frozen mountainsides, which sounds like way more fun than those other things. Although, full disclosure: there's at least one reference to cats.

Nasty-looking zombies fill the infested world of Pushmasters, but you and up to three friends can join in to keep everyone safe. Shove the mindless zombies out of the way to stay alive, preferably the way that means they plummet to an untimely second death. Choose from four characters, each with their own special ability: Slice T. can punch, Cat Lady's got some mean movement skills, Sushi can ring an impressively powerful gong, and Bob can stun surrounding foes, most likely with his charming personality. Five unique levels and a handful of power-ups change things up a bit, but otherwise it's just you and an epic case of rooftop claustrophobia.

Pushmasters is currently available on XBLIG. Four player local co-op is supported, so bring some controllers. And if this game made you think of this Mario Party animated gif, you probably spend too much time on the internet, just like we do.