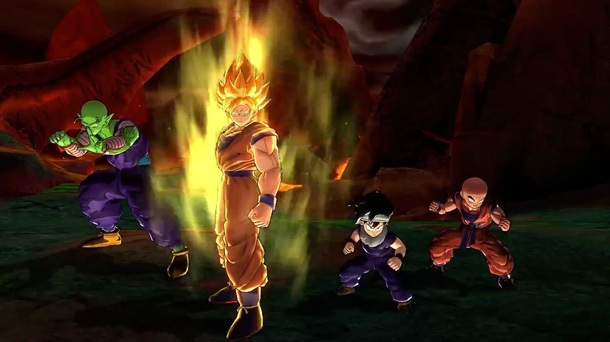 As soon as we saw the trailer for Namco Bandai’s newly announced title, Dragon Ball Z: Battle of Z, we realized we could possibly have a real gem of a game here, as far as Dragon Ball Z franchise goes. We asked ourselves: where could they possibly take the Dragon Ball Z games after making practically every character in the series playable? Well, how about mixing and matching them together to form super squads and fight as one?

Before the introduction of the Super Saiyan transformation, fights outside of one-on-one combat were special part of the series we all know and love. Sure, Goku and Vegeta frequently teamed up together in the later story arcs, but there aren’t many team battles with more than 2v2 at one time past this point. One fighter is either much stronger than everyone else, forcing the rest to team up to beat him or it’s the other way around. Battle of Z, however, equals out the playing allowing for some truly stunning battles to ensue and provides a true battlefield for these warriors. Check out the first trailer for the game right here, right now:

Want to recreate the Z Fighters vs Vegeta, Nappa, and the Saibamen? No problem! How about Gohan, Future Trunks, Goku, and Vegeta vs Frieza, Cell, Babidi,and Majin Buu? This game allows for some interesting match ups and gives fans the tools necessary to create their dream team of Z Fighters or villains. Whether you just want to team with friends to take on the story modes, or take your skills online for multiplayer brawls, this game should have everyone covered with 4v4 battles of epic proportions.

No release date has been stated thus far, but we do know that Battle of Z will be available on the Xbox 360, PS3, and PS Vita. Hopefully more information regarding local co-op play will be revealed soon as well. What is your dream Dragon Ball Z team? Let us know in the comments below!