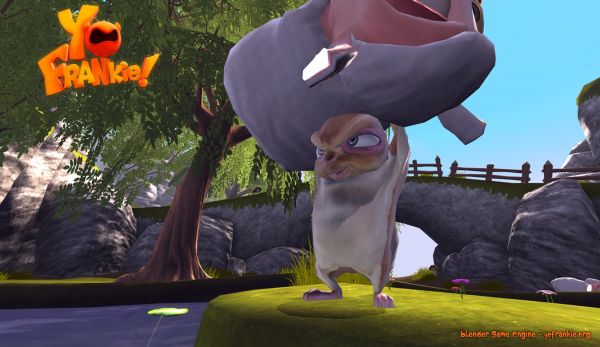 We found a special treat in our tip jar today! J3DI from Colony of Gamers sends us word that a low-flying indie open source game has been made available, and all appearances indicate that it has two-player co-op.

In November 2007, Project Apricot was announced. Six developers would use only open source software to create a platformer based on the characters from the film Big Buck Bunny. Both the film and the game are created using the free animation and modeling software Blender (current version 2.40). Project Apricot was officially named Yo Frankie! in time for release, "Frankie" referring to the game's main playable character.

Details about co-op have so far not been released. The game is free for download as of December 09th; however, due to the game's open source nature, it can only run using Blender or Crystal Space client software.

Click "Read More" for pertinent information from the game's official site and from our tipster...

The team will work on a cross platform game (at least Linux, Windows, OS X), using Blender for modeling and animation, Crystal Space as 3D engine and delivery platform, and Python for some magic scripting to glue things together.

Note that since the time of the above posting on the Yo Frankie! website, the game has been developed for both the Blender and Crystal Space engines separately.

The game Yo Frankie!, has the player assume the role of a flying squirrel who seems to have something against sheep and rats. The game is free (as most open source stuff is) and can be downloaded from the site http://www.yofrankie.org

There is also a DVD available for purchase, which includes special features, as well as both versions of the game.