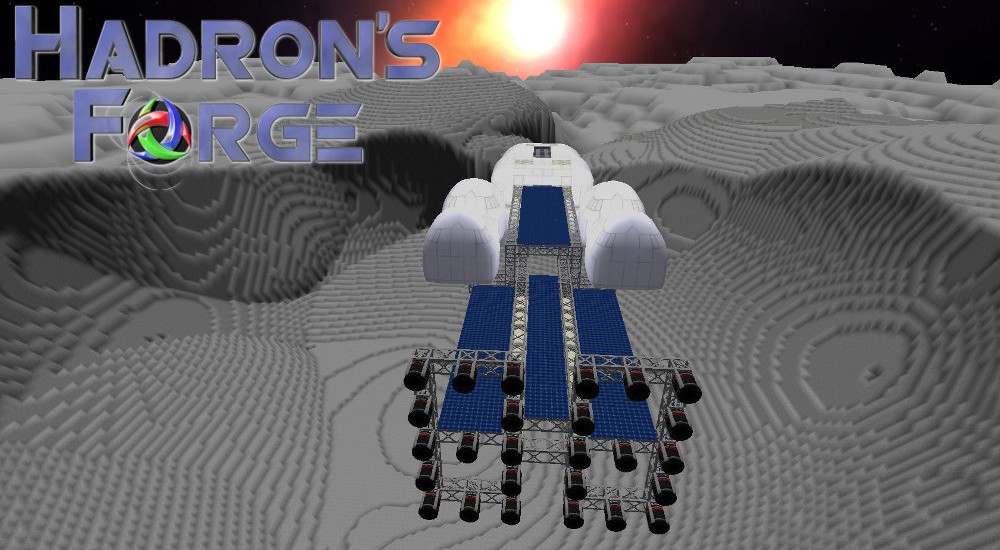 The three words every young gamer dreams about hearing: sci-fi, space, exploration. And Hadron's Forge has them all!

Arcane Logic's debut title Hadron's Forge has some lofty goals. Not only does the game aim to create a procedurally generated sandbox environment, it also wants to include mining, building, robotics, crafting, a knowledge and tech tree, and endless space exploration, all while keeping everything as close to real-world science as possible. That means no jetpacking to Jupiter, but it adds an extra layer of badassery to the already promising game.

Virtually everything in Hadron's Forge will be customizable by the players, including the terrain itself as well as your own interplanetary space ship! Mining lets you fill a periodic table full of elements as you mine ores and refine them down to their most constituent parts. Using those metals you can then forge items and item parts, some of which can be used to create advanced nanostructures or even the rarest mineral in the universe: paradoxium.

A multitude of modes are currently planned for Hadron's Forge. Single player includes story, survival and sandbox, which is par for the course as far as games of this nature are concerned. With multiplayer there's both co-op and competitive, the former of which includes both survival and sandbox maps, while the latter features challenges that may or may not be peaceful in nature. For example, you might compete to see who can gather enough resources to fill a trade contract. Or you might find you and your opponent dropped on an asteroid to see who can destroy the other player's mining pod first.

Perhaps one of the most exciting things about Hadron's Forge is the team behind the game. Arcane Logic was founded by two "ex-aerospace guys" who liked to eat sushi and discuss space exploration. Since meaningful progress in that field isn't likely to happen in our lifetimes, the team decided to simulate it as accurately as they could. With real-world experience in designing space crafts and engineering, the duo started work on Hadron's Forge. These guys aren't messing around!

Arcane Logic promises more information about Hadron's Forge soon, including additional details about multiplayer. It is currently unknown just how many players co-op will support.