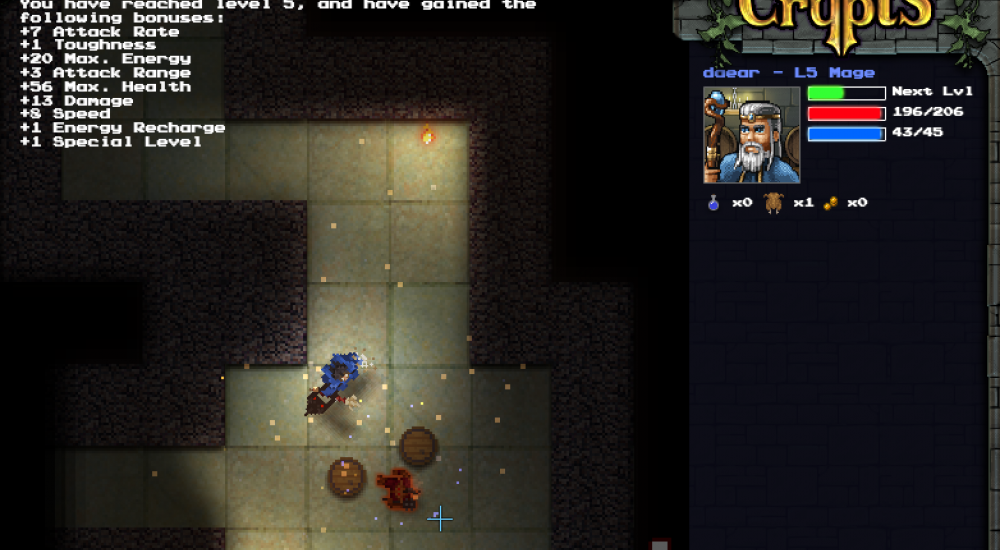 Lost Crypts is just the co-op dungeon crawler you're looking for. Played entirely in your browser, this retro-styled RPG puts you in floor after floor of dimly lit corridors stocked with enemies, spawners, gold and treasure. Along with up to three other players, it's your job to mine each area for all it's worth, then head down to do it again. Shockingly fun, and the co-op is simple but inclusive enough to work.

Grab a character, pick a server, then start dungeon running. It's as simple as that. The keyboard/mouse controls let you move, attack, unleash special attacks, eat food and drink potions. Just what you'll need to take out enemies running in from all sides. Equipment is spread across a few different categories such as boots, amulets, and rings, and you can only have one of each item at a time. If you discover something in the game, you have to decide which one you want and leave the other one behind. No item management or spacious inventory, and the store is limited to a few items sold between floors. Frugal adventuring at its finest.

Co-op gets up to four players together to fight through dungeons as a team, sharing gold pickups and communicating with basic text chat. You'll find simple "gestures" can usually tell the other players what you want them to know. Standing at the mouth of a corridor and spinning in a circle, for example, might mean "get your heroic butt over here, this is where we're going". As long as you don't have some lame griefer, you'll do just fine.

Lost Crypts takes a few cues from the freemium business model that's so popular in the mobile gaming world. You're not pestered to purchase things every other turn, but you can put down some real money to buy soulstones, the game's version of instant continues. Soulstones naturally regenerate over time, but you can nab whole packs of them for some cash if you find yourself prone to dying.

Lost Crypts is currently in beta, but it's already a surprisingly satisfying game. Four player online co-op, a whole lot of splattering enemies and exploding bombs, and enough loot to keep you diving deeper and deeper.