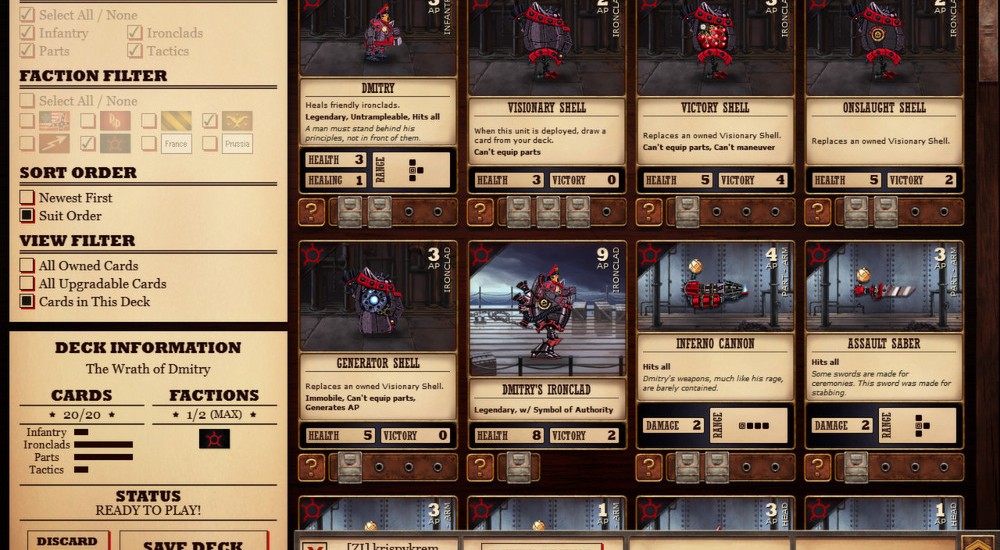 Zachtronics has powered out the first piece of DLC for its strategy-heavy Ironclad Tactics. The Rise of Dmitry dips into the character's backstory across eight new missions, including the six-stage Fort Phantom Ridge gauntlet. Dmitry even has his his own set of cards, complete with transforming ironclads!

The steampunk strategy game Ironclad Tactics was released in September 2013 and has been powering along with updates ever since. The last big patch added a new game mode along with a handful of extra features, including URL-based deck exporting. The main campaign sends you to an alternate version of North America during the Civil War. Create and manage decks of cards to form your basic tactical maneuvers, then face off against AI opponents as you battle your way across the continent.

Making the tactical gameplay even better is the included two player online co-op mode. You and a friend create your own decks and fight the bad guys together, drawing from separate pools of action points but placing cards on any friendly unit. There are also skirmish and puzzle levels that tweak the gameplay a bit, though don't think the difficulty lightens up even the slightest.

Owners of the Deluxe Edition of Ironclad Tactics will already have The Rise of Dmitry ready to roll. For everyone else, the DLC is currently available on Steam for a 10% discount until February 28.