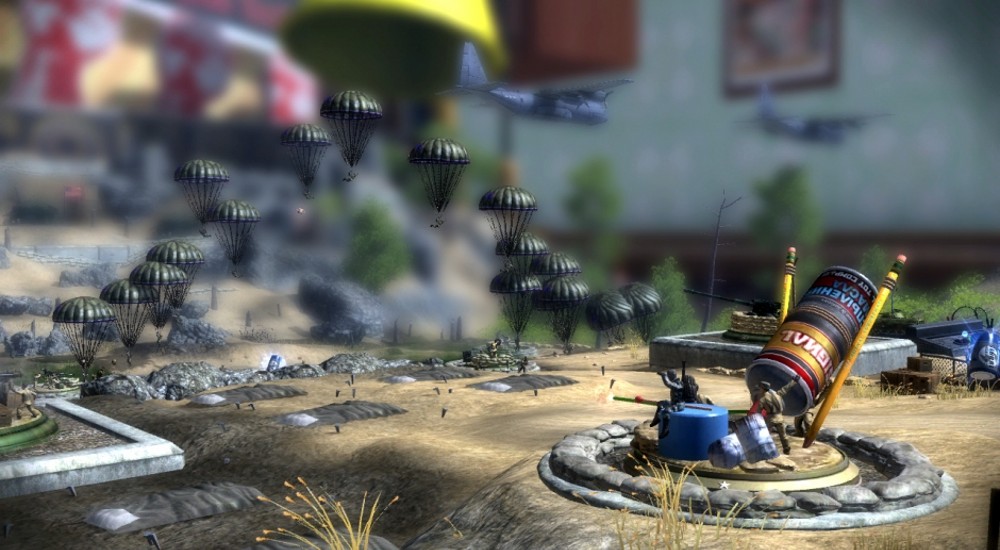 Mom's in the other room, dad's outside, and your annoying siblings are out playing in the sprinkler. Time to break out the toys! The fantastically faithful Toy Soldiers tower defense game has just hit Steam in a big way. Toy Soldiers: Complete features the original game along with Toy Soldiers: Cold War and all the DLC packs released the last few years. Signal Studios estimates 60 hours of gameplay, which is a whole lot of quality toy time.

Toy Soldiers: Complete isn't your usual tower defense game. The whole thing takes place in a toy box, so despite its somewhat gritty color palette, there's a pervading sense of humor that keeps thing snice and lighthearted. You'll also do a lot more than just click on towers. Toy Soldiers lets you fly planes, man gun turrets, head up the artillery and much more.

Complete is on Early Access, which means it's still very much a work in progress. The development team stresses that bugs and interruptions in gameplay will probably happen, including possible leaderboard resets and times when you may not be able to build turrets. Keyboard and mouse control is also in alpha, so only jump in if you're sure you want to be one of the early guinea pigs.

Despite the caveats, the amount of content coming to Complete is looking impressive. Players will even be able to use units from the original game alongside Cold War units in multiplayer, which is probably a dream come true for a few people out there.