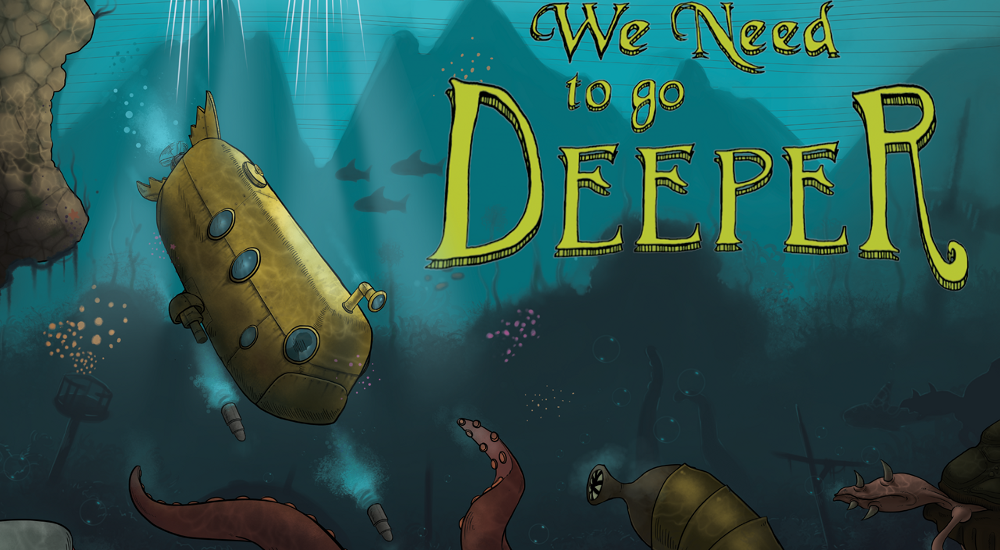 What would it have been like to travel the vast underwater worlds as a crew member in 20,000 Leagues Under the Sea? Deli Interactive and its upcoming exploration game We Need to Go Deeper wants to convey that exact feeling. Four players fight for their lives aboard a submersible that travels through the Living Infinite, encountering giant squid, nasty car-sized crabs, and the occasional box full of shiny shiny loot.

We Need to Go Deeper splits gameplay into two pieces. The first is a bit like the starship bridge simulations that have been making the rounds lately (Artemis), only instead of fixed roles, every player's job is simply to keep the others alive. Make repairs on the fly, attack foes that invade your submersible, load torpedoes, reroute power to the shields, and just generally try not to drown. All of this takes place in a 2D sidescrolling world and in real-time, so we're guessing faster repairing would be better than slower.

Stay alive long enough and you'll have a chance to don a diving helmet and explore caverns on foot. Naturally, everything here is trying to kill you, too, but you've got weapons and you've got a mean hankerin' for treasure, so it's totally worth it.

Deli Interactive describes We Need to Go Deeper as a roguelike, so we're guessing permadeath is a thing, as will be the destruction of the entire world upon said death. The Living Infinite changes around a bit each playthrough, so finding an excuse to dive back in probably won't be an issue.

We Need to Go Deeper is currently in pre-alpha and is looking for some attention on Steam Greenlight. If all goes as planned the game could see the light of day by the end of the year, four player online co-op support in tow!