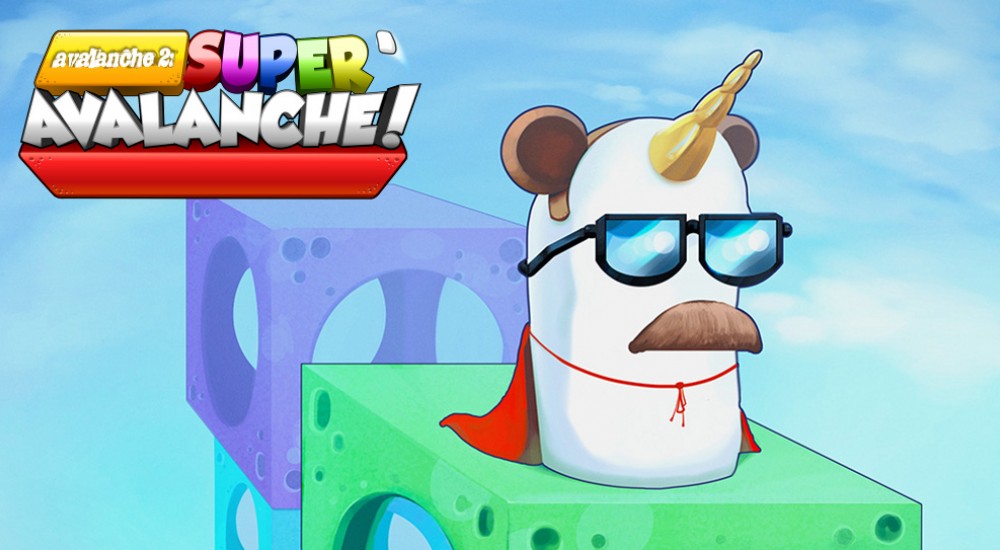 If you've ever been in a situation where painted blocks are falling endlessly from the sky, you'll feel right at home in Avalanche 2: Super Avalanche. The sequel to the 2007 browser game is working its way to PC, and this time it's packing a simple but effective co-op mode.

The basic idea behind Super Avalanche is that the sky is falling, and you're trying not to get squashed as you work your way ever upwards. Playing as a marshmallow (of course), you can hop, walk and wall jump along the sides of these blocks, gaining height by any means you can. Blocks can be broken if you whack them from below several times, but the key to survival is staying on top of things. Literally, yes, but also metaphorically, because knowing where you need to be in two seconds is really helpful, too.

Power-ups throw some great abilities your way, just as long as you're careful not to get too carried away with them. Sure, it's nice to have a floaty balloon on your back, but that extra jump height can get you into trouble. There are lots of power-ups to experiment with, along with a custom shop where you can use your collected coins to buy badges and costumes. Missions give you more goals than simply climbing as high as you can, so even though each run may last just a few minutes, there's plenty of reason to come back for more.

As for co-op mode, two local players can sit down and survive the apocalypse together. Players can bump into each other, provide a little lift, and even form a lift cloud once the inevitable grip of death closes in on them. Data is kept separate, so each player can come back later to try some runs on their own.

Super Avalanche is shaping up to be a surprisingly captivating casual game. It's currently in beta with a browser demo you can try out (no co-op there, unfortunately), and developer Beast Games is seeking support for the PC release on Steam Greenlight.