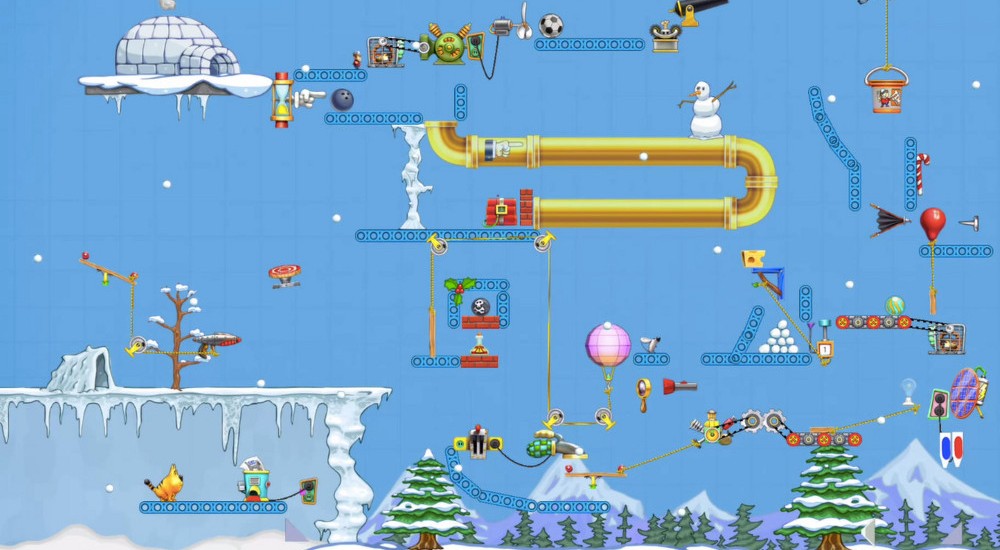 Contraption Maker, the sandbox puzzle game from the makers of The Incredible Machine, was first presented to the world back in the fall of 2013. Its alpha release was a little rough, but the dev team has been chugging along all these months with tweaks and improvements and additions. The official "beta" stamp means all of the core systems are in play and the big 1.0 release isn't far away!

Just like its classic predecessor, Contraption Maker is a free-form building game that gives you an inventory full of seemingly random items and challenges you to solve a puzzle with them. You inevitably end up building something straight out of Wallace and Gromit, what with the toast flying everywhere and the tubes carrying various cheeses to hot air balloons. We wrote a preview for Contraption Maker's early access release, so give it a read for more info. Co-op is still a touch bare at the moment, but at least you can hop online and collaborate using the new server browser interface.

The full list of additions and changes is staggering. Along with a pile of bug fixes and tweaks to the physics, new parts have been added to the game, the UI has been improved, and new art and music have been added. A fistful of new puzzles were also folded into the mix, bringing the official count up to 100. That's just developer-made stages, mind you. The swarm of community-created content bumps that number up to... a lot more. One of the biggest selling points for the game is the insane amount of freedom it gives you to build and tinker on your own, which is why making your own levels is half the fun!