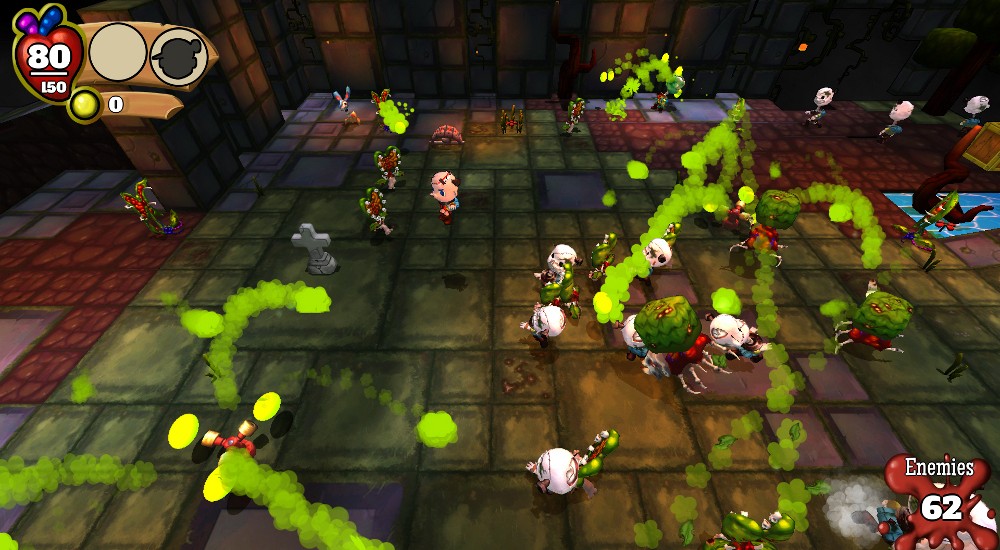 FrankenJohn from bitsmith Games is one part roguelike, one part experiment in insane arena combat. The game drops you (and maybe a friend) in maps packed with B-movie horrors and sideshow-worthy mutants whose goal is to eat you alive. Your only weapon is whipping your head around on a chain. It's ok to shudder.

FranknJohn himself is a failed experiment abandoned by Dr. Harmin. He wakes from his grave with no memory, only an insatiable desire not to be dead anymore. His head is attached to his body by a chain, which allows him to swing it around in all directions, damaging enemies and breaking things like tombstones and crates. You can find and equip Skullcaps that give you special abilities, such as a turtle shell that doubles as a shield, but apart from that you're on your own in these arenas. No guns or grenades, just brainsmacks.

The current demo for FrankenJohn doesn't have all of the features planned for the full PC, Mac and Linux release. Co-op, for example, doesn't seem to be present, but the feature does exist and will hopefully be implemented soon. When it does, expect two player local action that might give you a slightly better chance of staying alive. The current arena does feature a handful of Skullcaps to try out along with plenty of hyper-violent enemies to end your day prematurely.