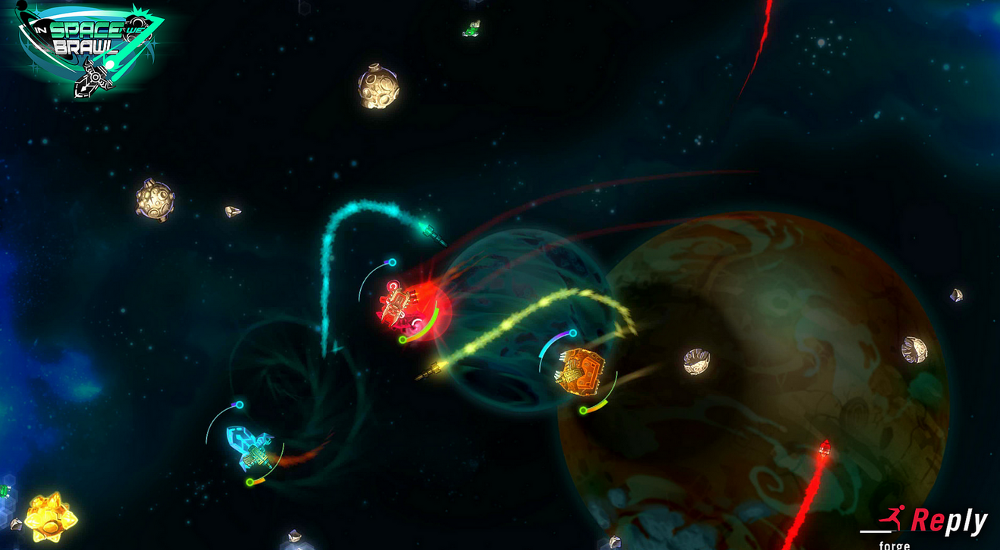 The folks at Forge Reply really like to spend their lunch breaks screaming at and taunting each other. From those sandwich-fueled yelling sessions, In Space We Brawl was born. It's kind of like a twin stick shooter crossed with a beat-em-up game, but because it takes place in space, there's a lot more room to maneuver. Also, no one can hear you scream, so be sure to yell extra loud.

One of the focal points of In Space We Brawl is diversity in fighting styles. Players can choose from a variety of spaceships and weapons, mixing and matching eleven types of each for a total of over 100 unique combinations. Maybe you want a speedy but weak Pulsar ship that's got a plasma sword. Maybe you want something with a sniper rifle that's got an energy output to do some real damage. Or maybe, just maybe, you want to pilot a Striker, which uses grabs asteroids and slings them around as weapons.

Once you've come up with your own insane ship creation, it's time to test it out. In Space We Brawl supports four player local co-op matches in arenas littered with weapons, debris, asteroids, and AI-controlled ships. The co-op just barely falls under our definition of what a cooperative game should have, so in addition to working together to vanquish AI enemies, be prepared for a little "just friends" competition between players. In space we fight about who's the best.

In Space We Brawl is heading to PS3 and PS4 sometime between now and the end of all things. Developer Forge Reply promises more info about weapons and battlegrounds soon!