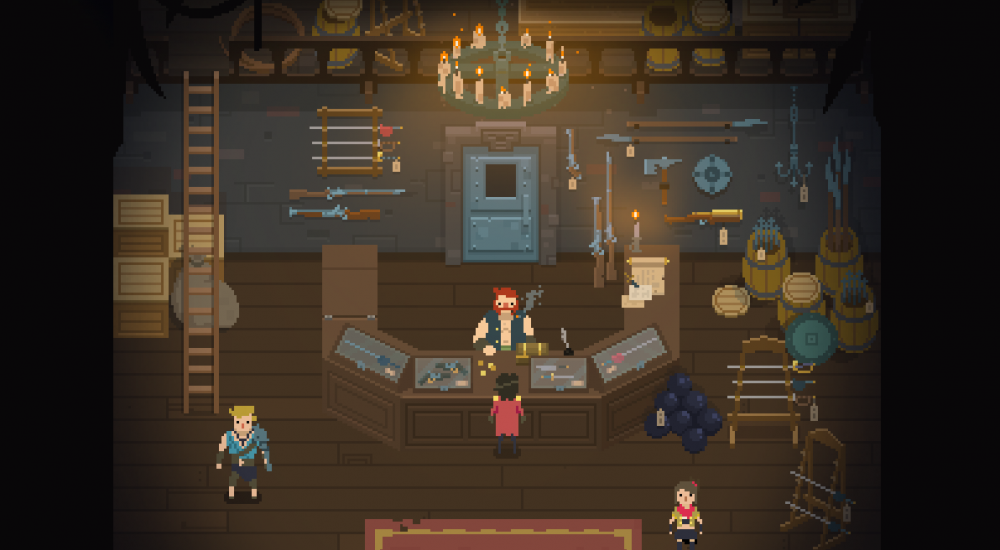 So... What's the development/publishing house Chucklefish up to these days? You know, getting Starbound updated to version 1.0, maybe having a shaved ice since it's so hot these days. Oh, there's also Wayward Tide, a brand new project that's all about pirates, piracy and co-op pirating!

Wayward Tide takes place on an archipelago during the golden age of piracy. No, it's not now, we're talking back in the "olden days" where wooden ships sailed the seas and Biebers didn't roam the Earth. You and your co-op friends will fight, trick, loot and backstab your way through a bustling sea town filled to the brim with ne'er-do-wells and other salty sorts.

One of the most important features of Wayward Tide is how the puzzles and traps are constructed. Most co-op games are purely cooperative with maybe a few optional "haha u suk" moments thrown in for good measure. In Wayward Tide, that happens a little more frequently. Take a pressure plate trap, for example. The solution involves everyone stepping off the plate at the same time. If someone jumps off early, the other players get treated to a boulder in the skull. *sniff* Sorry, bro.

Other planned features in Wayward Tide are randomly generated levels, five distinct themed islands, both local and online co-op for up to four players, and healthy support for modding. No release window has been announced for Wayward Tide.

Also, don't worry about Starbound. Chucklefish clearly stated that Wayward Tide is a separate project by a different team of developers. They probably don't even get to talk to each other, that's how separate they are.