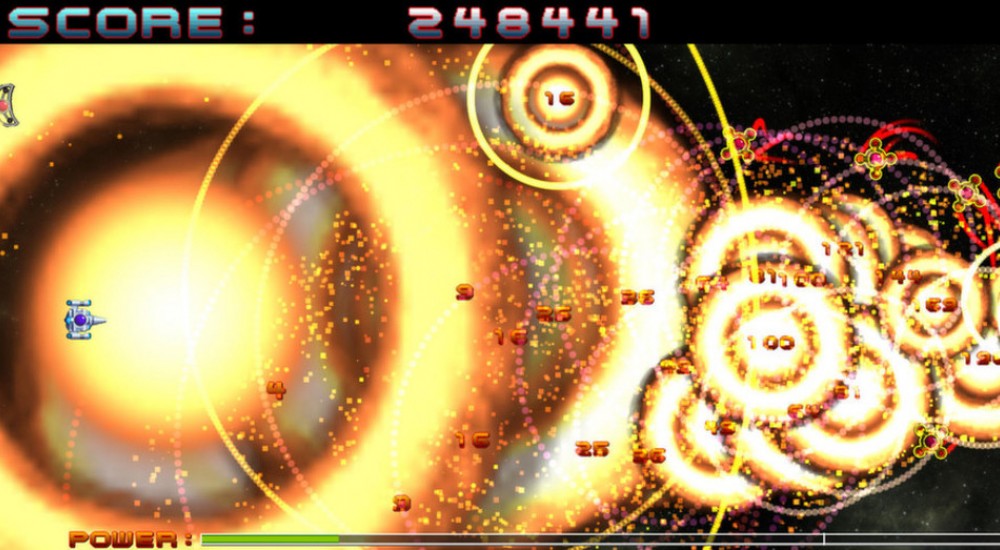 Ever thought your shmup screen just wasn't wide enough? Super Chain Crusher Horizon is here to save the day. Created by a little studio called Mindware, the game is played in a 3200x800 window and allows you to create big blasts that are over 2000 pixels wide. We're not sure if that's some sort of explosion record, but it should be!

The super wide screen isn't the only thing this game does different. Instead of filling the screen with enemies and bullets from your ship, Super Chain Crusher Horizon is all about keeping your trigger finger steady until just the right moment. The longer you wait to fire, the more powerful your shot will be. Bigger shots cause bigger explosions, catching other enemy ships in the fray and setting off massive chain reactions. Miss a ship and its frame piles up on the left side of the screen. Hit this debris and it's game over! There are loads of modes that tweak this basic formula, and even the mini-bosses do some wild things that defy convention.

Co-op mode in Super Chain Crusher Horizon is more than just "single player with another ship". The second player can join in at any time, using the mouse to control a little disc that can move freely around the screen. This disc can set mines that cause the same sort of chain reaction as the ship's shots. It's a very different sort of experience, almost tactical in nature. But don't worry, there's still 2000 pixel wide explosions!

Super Chain Crusher Horizon is the kind of shmup that even non-fans of the genre will get a kick out of. It's currently available for Windows via Steam and other digital distributors.