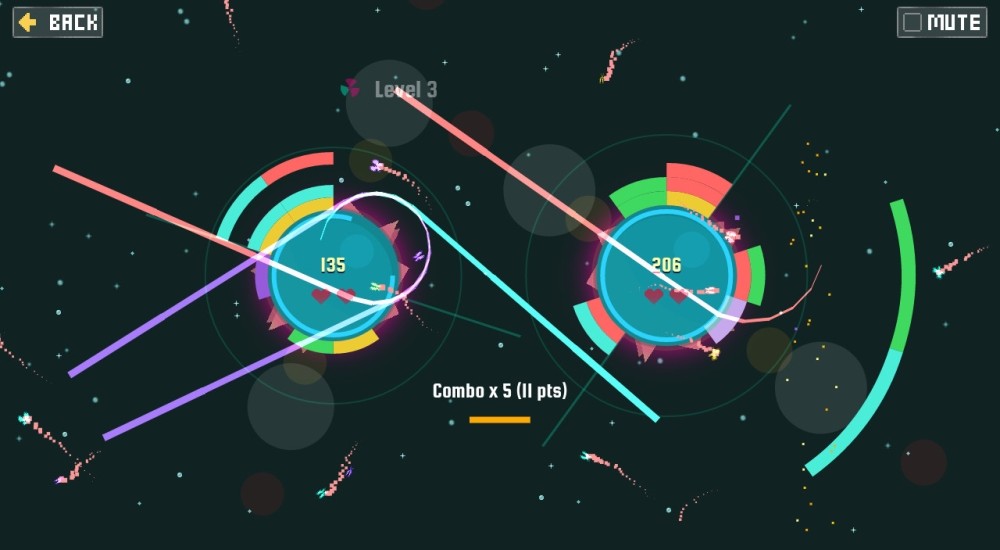 A great puzzle game from indie developer Rezoner has made its way to Steam with a feature we're particularly excited to see: local co-op. QbQbQb has all the makings of a sweet casual puzzle game, including a bonus karaoke song, which should be mandatory for all games ever.

QbQbQb is a color matching puzzle game that takes place around small planets called... planets. Rectangles fall from above and slowly drift to the surface. You can rotate them around the level and situate them so they form groups of three, which makes them disappear. Rack up points and achievements for pulling off combos and other feats of awesomeness. It's immediately familiar so it pulls you right in, but the rotation-based gameplay and extra modes are what keep you hooked in the long run.

Co-op mode switches things a bit to allow players to work together. Instead of rotating the planet to accommodate blocks, each player moves their own blocks independently. There isn't much time to strategize, so the more psychic you and your buddy are, the better.

QbQbQb wins a lot of bonus points for its phenomenal audio visual package. It's one of those games that just looks and feels great, even when you're staring at a game over message. Oh, and there's a karaoke feature you can indulge yourself in. Just sit on the mode select screen for a few seconds, close the blinds, and you're a star.

QbQbQb is available for Linux, Mac and Windows via Steam and the Humble store. There are also iOS and Android versions available. Note that the mobile releases don't have co-op, because that would just be awkward for everyone involved.