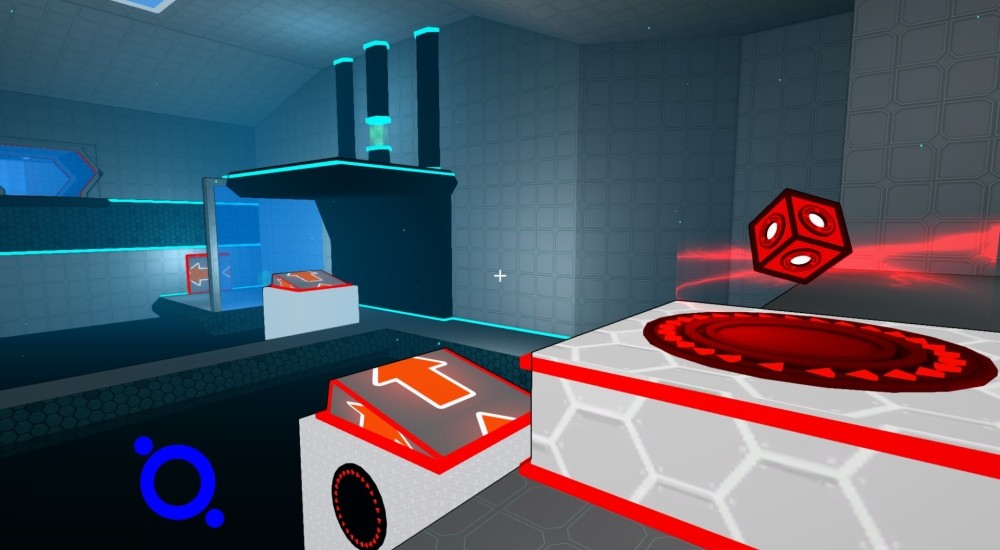 If you're looking for a stylish first person puzzle fix, Bluebutton Games is ready to deliver. Polarity puts you in the high-tech shoes of a hacking robot who can change polarity at the touch of a button. Red passes through red and blue through blue. Good thing that's exactly the skill needed to bust into this virtual vault!

Polarity takes place across a series of small rooms where everything of note is either blue or red. Or neither, I guess, but you'll always want to focus on the colorful things.Color is key,as that's how you know what will happen when you interact with certain obstacles. Shimmering blue platform hovering over a pit? Switch your polarity to red and you won't pass through. You'll also pick up polarized cubes and use them to activate platforms, doors, jump plates and more, all in the name of hacking.

Ever since Portal became a thing, it's practically impossible to make a first person puzzle adventure game without inviting some comparisons. It's a matter of degrees. Polarity has a very quiet setting with nothing to distract you other than the puzzles blocking your progress. It utilizes more jumping puzzles than some might be comfortable with, but with the polarity gates and barriers all over the place, it makes for a nice change of pace from pure cranial stimulation. Co-op mode sticks you and a local friend in a campaign designed for two people. It's surprisingly satisfying to work through, even if splitscreen on anything smaller than a TV screen may not sound ideal.

Polarity is out and available via Steam. It also happens to be on OUYA, Android and iOS, though on those platforms it doesn't feature as many levels or the co-op mode found in the Steam release.