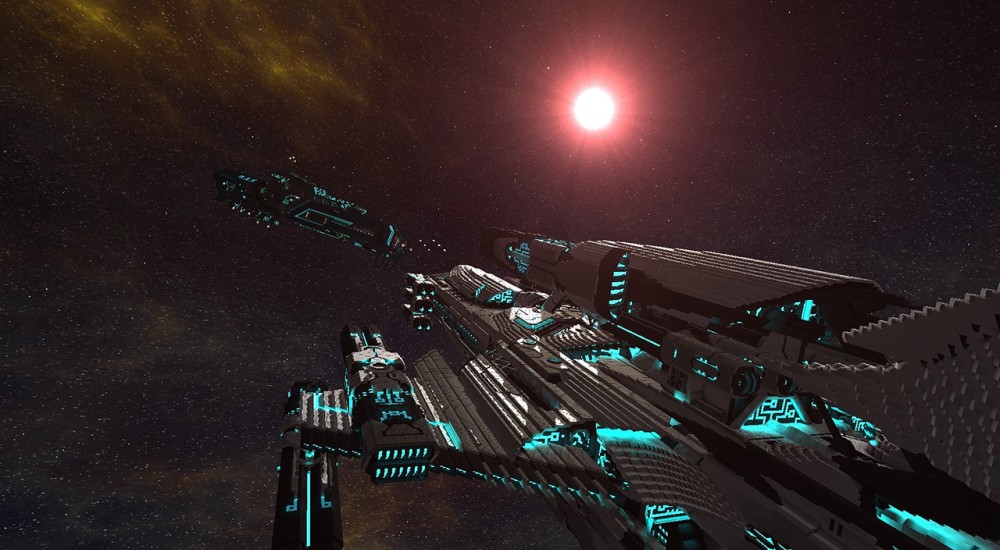 Don't let your eyes glaze over when you see this phrase: StarMade is like Minecraft in space. It is, but it isn't, really. The clever 3D voxel game from German studio Schine has just hit Steam Early Access, but already it's gathered quite a following. That's probably because it's a game that lets you build a ship and fly through the universe to explore new galaxies, stars and planets.

You know, that teaser deserves a little expansion. Not only can you build, fly and explore, you can also discover and salvage space stations, fight against pirates or opposing factions in multiplayer, trade and make a fortune, mass produce materials in gigantic factories, design your very own space station, create warp gates and network the universe at your front door. And do it all with your online co-op friends on dedicated servers, too.

StarMade begins on a planet, but that's where the Minecraft similarities end. Build stuff on the ground? Yeah, sure, it's got that. But since StarMade is all about, you know, stars, you probably want to build a ship to blast off into space. So, do it! Plop down a core, attach boosters, guns and the like, then head into orbit. From there, you can add and tweak your vessel to make it truly spaceworthy, at which point you'll want to dive into the meat of StarMade's gameplay: space exploration.

StarMade has been in development for a couple of years, but the team is using Early Access as a way to spread the word and get some extra financial support. In other words, it's not a broken husk of a game that's going to be abandoned the minute you put your cash on the counter. Schine is even offering the demo for free during alpha, which means you can try the game before you buy it. How's that for confidence in their work?