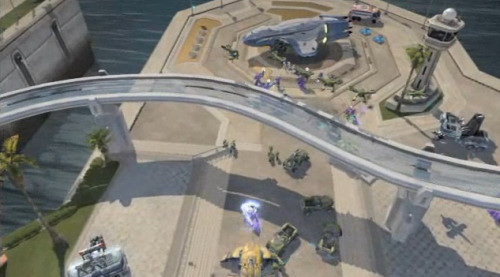 The final vidoc for Halo Wars has been released (Others: 1, 2, and 3) and this time the video focuses on different gameplay modes, including co-op as well as different tactics.  There's even talk of some interesting tactics players can do in co-op.  For instance, one player is able to manage the economy and just pump money into the other player while the main player focuses on combat.  But really...where's the fun in that?

Also today the review embargo has lifted for the game with several sites releasing their verdict.

Joystiq weighed in with two different opinions, both mostly favorable.

IGN scored the game an impressive 8.4.

Eurogamer scored the game an 8.0.

There was very little mention of the co-op in any of the reviews I  read, which is pretty disappointing.  We had hoped to bring you a review of the game's co-op modes, but alas, we still don't have a copy here in Co-Optimus HQ.