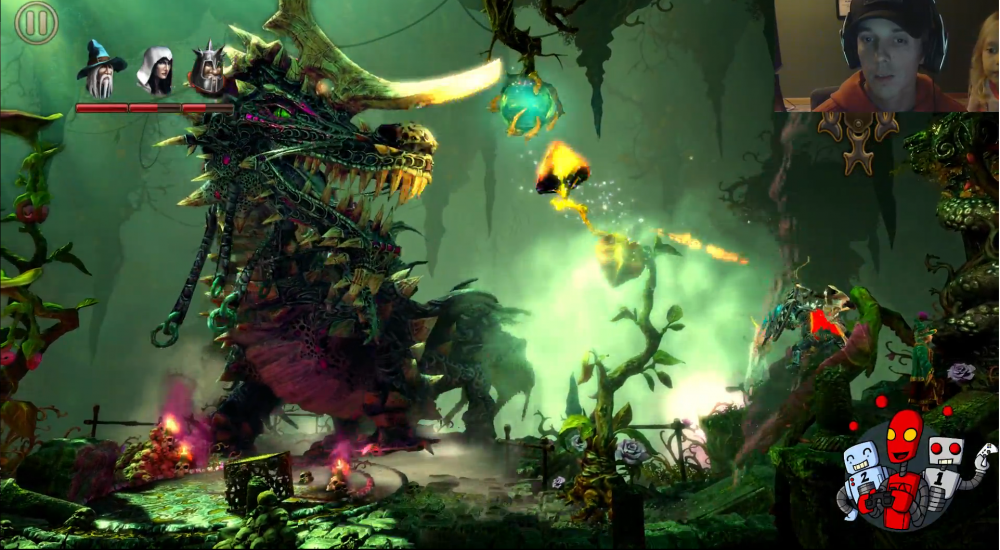 It's been a while since we've posted any videos, but Friday Awesomely Live Co-Op is still live (nearly) every Friday. Our two most recent successful streams include episode 6, where the F.A.L.C.O. team finished off Trine 2 and played a bit of the Goblin Menace DLC, and episode 7.1, where we massacred brain-hungry zombies in Zonaco.

Why episode 7.1? Well, we had a bit of a technical malfunction and episode 7 didn't record correctly. Oops! Regardless, check out that dragon in episode 6! That battle was epic! There's nothing I love more than a good co-op dragon battle, and the dragon in Trine 2 doesn't disappoint. To top it off, the battle required a good amount of co-op. Bobby (the knight) had no practical means of damaging the dragon, but his shield could prevent the dragon's fire breath from harming himself and others. Baldy (the wizard) could strategically hold exploding barrels where they'd hurt the dragon, but doing so made him immobile and vulnerable to attacks. I (the thief) could shoot exploding arrows at the dragon, but without someone else distracting the dragon, it's head was facing the wrong direction making it impossible for me to hit the dragon's weak spots. So how did we defeat the dragon? You'll have to watch to find out! Below is our play-through of Icewarden Keep, The Final Chapter (49:45), and The Heroes Return (1:07:00) of the Goblin Menace DLC.

Last week, we gave Zonaco: Your Brains Are Mine another shot. If you're not up on your Monaco lore, Zonaco is the zombie mode that was added to the PC version of Monaco: What's Yours Is Mine. It's easy to dismiss zombie modes as simply throwing another mode in there so the developers can check off that box, but I think Zonaco deserves a closer look. You play through the same missions as the original game, however, instead of guards and civilians, you're up against Wretches and Bloaters. Wretches are pretty much your run of the mill fast zombies (think 28 Days Later), once you get their attention, they'll chase you down and attempt to feast on your juicy brain mass. Bloaters, on the other hand, are nearly carbon copies of Boomers from the Left4Dead series. Let them get to close and they'll blow up just like the C4 item in the main game. Both enemies are extremely deadly, and completely change the feel of Monaco.

We played through Centre Hospitalier, Securitech Corp (20:18), and Musee Oceanographique (40:54) before running into a gooey zombie mess in Discotheque Rouge (55:45). We beat the later mission on our second attempt (1:28:26) despite being a man down for the second half.

Catch us live on Twitch tonight at 9PM CDT as Bobby and I do some co-op sneaking in Splinter Cell Blacklist. I've never played a Splinter Cell game, so this might get interesting!