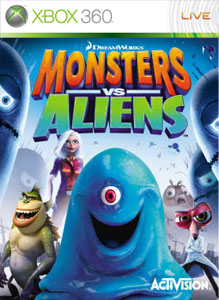 If you watched the Super Bowl, you probably remember the Monsters Vs. Aliens ad.  It was filmed in 3D, and if you snagged a funky pair of glasses from your local convenience store, both monsters and aliens popped right out of your screen.  It has a very 50's B-Movie feel to it, which means I'll be there watching it day one, for sure.

The inevitable movie tie-in game is just around the corner, and the demo is up on Xbox Live right now.  The game does feature two player drop in drop out co-op, so we suggest you grab a buddy and try it out!  Its a clash of titans!  A war of the gargantuan!  You'll quiver in fear at the Aliens... they came from outer space!  Even the Monsters might challenge the world!  This may be the day the world ends!