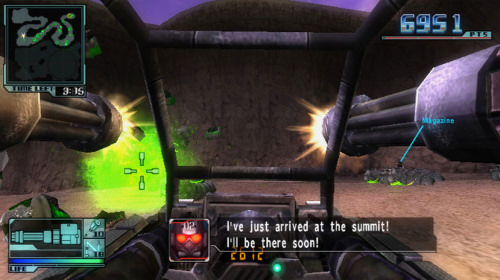 WiiWare fans can get their hands on Hudson's Onslaught this week.  The downloadable game features 4 player co-op play ONLINE.  That's right folks, through the magic of the internet you too can play with friends over the intertubes.

The game pits humans against insectoid aliens, and the cooperative mode looks a bit like a surival mode.  Think...Starship Troopers meets waggle wand.

Onslaught (Hudson Entertainment, 1-4 players, Rated T for Teen—Animated Blood, Violence, 1,000 Wii Points): Onslaught is an FPS that puts you in the middle of a futuristic war between humans and insectoid aliens. Become part of the Elite Interstellar Strike Force and fight against an overwhelming onslaught of alien life forms. Enjoy the rush of mowing down wave after wave of aliens with machine guns, grenades and more. Feel your heart pound as you battle gigantic boss aliens. Beyond the normal game, Onslaught includes additional modes that let you play with rivals from around the world using Nintendo Wi-Fi Connection. Team up with as many as three other players in Free Battle mode, or compete on special maps to see who can get the most points by killing enemies before time runs out in Ranking Battle mode. (Router and broadband access required for online play. For more info, go to www.nintendo.com.)