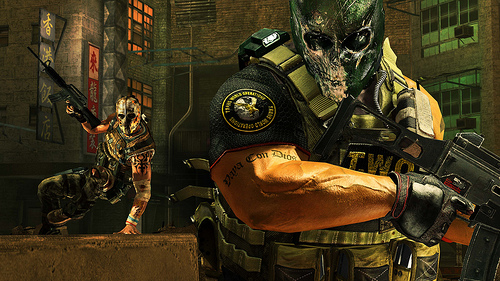 Army of Two was released last year to fairly positive reviews, it was a game that we enjoyed quite a bit.  Crazy masks, upgradable weapons, and true co-op play throughout the entire game made this a solid action title - and a somewhat risky one for EA - with the focus on co-op.

Army of Two: The 40th Day continues the story of Salem and Rios as they find themselves stuck in the war torn Shangai China region.  The new game promises a whole slew of new co-op moves (man train?) for players to perform.  These moves promise to "open up new strategies" and are said to be "more organic."  Hopefully that means the forced co-op road blocks that the first game threw at you are gone.

“With ARMY OF TWO: THE 40th DAY, we’re pushing the tactical two-man military team into new battlegrounds offering a completely organic and rich co-op experience to deliver an action-packed co-op shooter this winter,” says Reid Schneider, Executive Producer, EA Montreal. ”As chaos blankets Shanghai, China, you must rely on your partner to survive as you weave through a broken city left devastated in a mysterious wake.”

Army of Two: The 40th Day is set to be released this fall on the Xbox 360, PlayStation 3 and PSP.