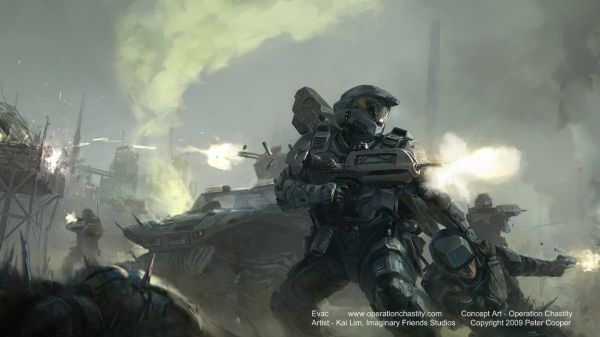 Any fan of co-op gaming is most likely a fan of the Halo series.  Every single Halo game to date has had some form of co-op gameplay in it.  Whether it's the split screen play on Halo 1 on the Xbox or the Online Co-Op of Halo Wars on the 360, it's been a staple of the series.

Pete Cooper is a fan of Halo as well.  How much of a fan?  So much so that he's dedicated countless hours of his life and over $40,000 of his money to creating a Halo movie.  We've all heard rumors about an official Halo movie, but until we see something concrete Operation Chastity is what fans will have to fall back on.

Pete isn't just a fan with a camera, his background is actually in film.  In fact he used to work in British TV and Film, but thanks to a rough economy, is now looking for a job.  Until something comes around his Halo movie is his life blood, and he's managed to scrounge up over 40k in donations and funding for this non-profit film.

The first order of business for his team is creating a real life Warthog.  And really, who wouldn't want a warthog?

The Warthog is a fantastic project. Much like the official Weta Warthog, we instantly looked to common 4×4 vehicles found within the country. Weta adapted parts from the Nissan Patrol truck, and we took the Land Rover Defender 110 as our base. Daniel Carey-George and Props Studios, who have been doing work on it since October, have done absolutely brilliantly with it. The story of the movie itself follows that of marines who want to go home during the Halo conflicts.  There's sure to be some great brotherhood co-op stories coming out of that.

Be sure to read the full interview with Pete Cooper here for all the juicy details, including some more great looking concept art for the movie.