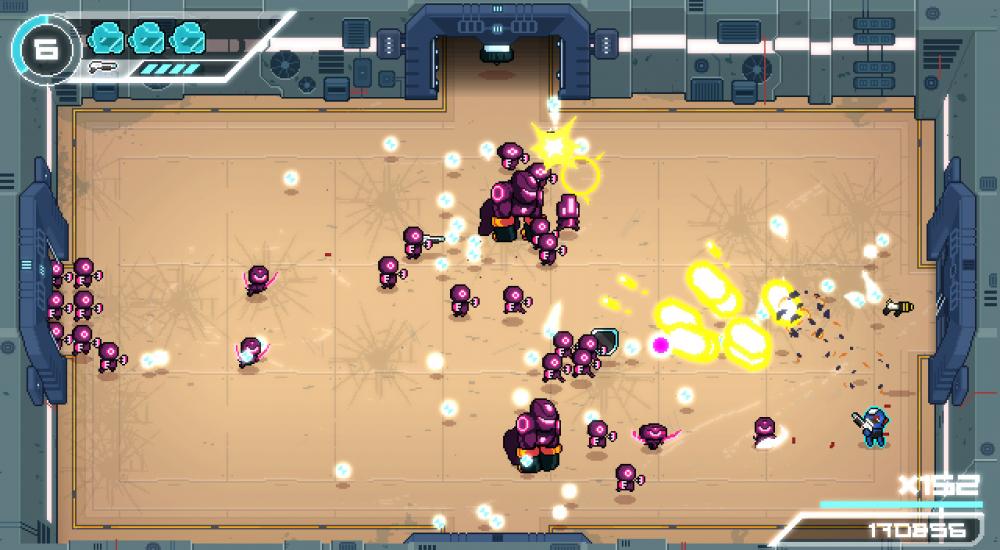 It's no secret Smash TV is one of my all time favorite games. I've got a design doc in my back pocket I'll some day pull the trigger on for my take on a modern day remake. Until that time developer aQuadiun are releasing their take on the classic twin stick shooter with Galaxy Champions TV, coming to Steam on September 6th.

Galaxy Champions TV adds a few features to the formula to bring the gameplay to 2018. The most notable changes are upgradeable weapons and character leveling. After you complete each room you'll be given a choice of three character or weapon upgrades. During the few runs I tried I got everything from character speed and health to weapon range and power.

One thing I found odd was while the game does have some of the "TV" aesthetic, it's not very over the top. There are cheers from the crowds and such, but you never actually see them. The pickups aren't cash but just glowing orbs. Still, it feels very much like a Smash TV game. Enemies range from robots to ninjas to turtles (but not ninja turtles) with the full roster promising 15 different varieties and three bosses. There also only seems to be a single path through the rooms, instead of offering up the choice of your next challenge.

Galaxy Champions TV is brutally fast. My first run I lasted all of two rooms before starting to adapt to the speed of the game. The screen shake out of the box is jarring, but thankfully is adjustable. It was like trying to aim while riding an amusement park ride. Galaxy Champions TV allows two player couch co-op play and that really ups the chaos on screen. At times making things frustratingly busy and unable to see any of the pickups available. On the flip side, with four doors of enemies pouring in, it's much easier to cover the entire room with a co-op buddy.

Overall Galaxy Champions TV should be satisfying for the hardcore twins stick shooter meets bullet hell fans. It may not be the second coming of Smash TV, but it stands very well on its own.