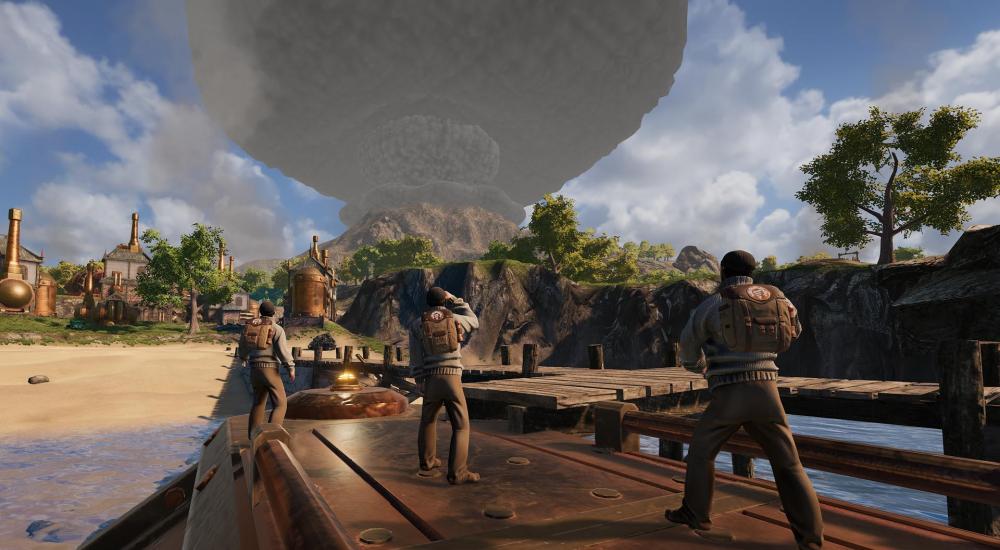 Minecraft started the trend of "survival crafting" games. That is, the loop is to gather resources, craft items, rinse and repeat to improve your chances of survival against some vicious enemy. Volcanoids is the latest game in this genre and in it you aren't only surviving against murderous robots - but a giant volcano erupting on a timer.

We checked out the game's co-op mode before its official release, putting four "Leon the Professionals" in the belly of a steampunk inspired drill on a mysterious island. Our goal was to craft parts and equipment to improve our vehicle and get to the bottom of why a volcano is intent on erupting every 20 minutes. And by get to the bottom I mean literally drill underground to avoid the magma.

In our way are crazed robots who apparently have their own drill technology. In our adventure we were able to conquer and scrap these opposing drills taking the best bits of what we can find. It's sort of like swashbuckling but with robots and guns instead of pirates and swords. I'll be honest, I'm not a fan of the survival genre but there was definitely enough here to keep me distracted from pickaxing a rock pile. As Mike put it - "Despite not really loving craft-em-ups, I found Volcanoids' theme to be engaging enough that I had a lot of fun in our short time with it. Someday we'll learn to get good."

Check out the video below and see us attempt to "get gud" - and be sure to stick around for the volcanic eruptions. They are particularly impressive with their impact to the world.

The Volcanoids co-op mode launches May 27th (not the 20th we originally claimed) on Steam. You can check out the game now though and get your single player on. It features four player online co-op.