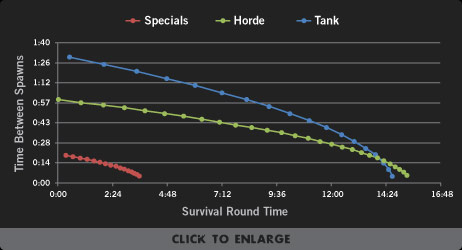 The official Left 4 Dead blog goes in depth with the upcoming FREE Survival Pack DLC that hits the PC and Xbox 360 versions next week.  While some may think the new mode would be a simple - throw everything at the player and see how long they can survive type gameplay - well, you'd be partially wrong.

As evidence by the above graph, Valve has carefully tweaked, timed and adjusted several aspects of the spawn timers to create an enjoyable and balanced experience of zombie slaughtering.  By calculating these numbers they (claim) to have created something that's fun and challenging.  Of course, there's always the player variables.

For example, a tank will be much harder to fight if a mob of common infected spawns at the same time - and nearly impossible if three hunters also show up right at that moment. A similar situation can happen due to variables outside our control - a team may not dispatch a tank or mob quickly enough, causing subsequent waves to start arriving and piling on to an already difficult battle. It's also hard to anticipate when teams will need to make an ammo run or heal up, both of which can be extremely difficult only a few minutes into the round. In order to help visualize these overlap points and the collapse of each spawn curve, we graphed out the wave behavior of infected over the course of a survival round.

Besides enemy spawns, there needed to be a balance found for ammo count and replenishment.  According to the blog post, in a single round of Survival, players may kill more zombies than an entire campaign playthrough!  With that many bullets ammunition becomes key, and co-op play becomes even more important as players try to work together to find the ammo dumps during a lull - or even in the heat of battle.

It sounds like the survival mode DLC is shaping up quite nicely, and we'll all get to get our hands on it next week.