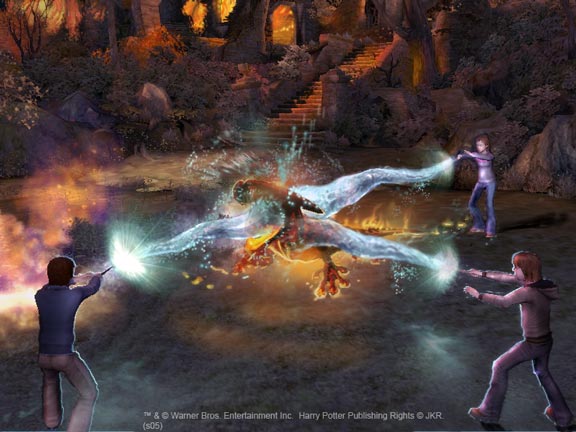 He's featured in seven books that changed the face of children's literature.  Five movies based on the books smashed box office records, and a sixth is due this summer.  We're talking, of course, of Harry Potter.  When a property is as popular as this, it's no surprise that dozens of video game tie ins will flood the shelves.  Today, we take a look at the only title in the series to feature co-opgameplay.  Don your robe, and grab a wand and a handful of  "Every Flavor Jelly Beans" as we investigate the videogame adaptation of Harry Potter and the Goblet of Fire.

I'll get one thing straight as we begin: I'm a bit of a Harry Potter nerd.  I'm a teacher, and any teacher will tell you that Harry Potter has done more for the cause of children reading than anyone since Dr. Seuss.  The books are just plain good, and fun to read.  Harry Potter is a pop culture phenomenon.  This immense popularity makes a Harry Potter game a good choice for this column.  Our aim is to cover games that are kid friendly, plus those that are appealing to non standard gamers.  Harry Potter and the Goblet of Fire is a fine example of this kind of title. You may be wondering why I'm covering a game for "old" systems instead of the latest and greatest current gen.  There's a simple reason for this: backward compatibility.  The Xbox version of HPatGoF (nice acronym, eh?) is an original Xbox title that works just fine on your 360.  Of course, the GameCube version is totally playable on your Wii, as well.  Those of us lucky enough to have an early version Playstation 3 can handle the PS2 Potter no problem; I don't know if it would work on newer PS3s, though.  Another benefit of being an older game is the price!  Our copy of theXbox version was under $10 shipped, and that was over a year ago, and the price is likely lower now.

I was quite surprised to learn that Harry Potter and the Goblet of Fire was the only Potter game to feature co-op!  Obviously, Ron and Hermione are major characters, and the three are practically glued at the hips in the books.  To think that co-op didn't happen until the fourth game in the series is just a shame.  Worse still, the fifth game took a step backwards and continued the single player trend.  Sad, but true.  The co-op in HPatGoF is well done, and beyond the tie-in, is easily the best part of the game. As you'd expect, you and a couple friends take on the roles of Harry, Hermione, and Ron.  After training levels, which take place in Mad Eye Moody's Defense Against the Dark Arts class, naturally, the trio head off to several locales to explore.  The Hogwarts exterior is one of the first, and for fans of the series, it is a treat.  The castle's stairs, gates, and bridges arelabyrinthine and filled with irritating magical critters to fight.  The Forbidden Forest is quite gloomy and atmospheric, filled with dangerous goo-spitting plants and more dangerous irritating magical critters.  Once you collect enoughTriwizard Shields, new levels are unlocked.  The only real complaint I have about this is the backtracking involved.  You'll be going back through levels more than once at several points.

In the books, Harry, Ron, and Hermione have quite different talents, but in the game, they play the same.  You have a decent variety of spells at your disposal, and each of them are well animated.  You can shoot sparks singly, or charge up for a multi-shot burst.  Levitating objects is a piece of cake, though camera issues mar the experience somewhat.  Fires can be put out by summoning a waterspout from the end of your wand.  There is a fair degree of customization of characters, coming from collecting cards.  Before each level, you can pick which card abilities to use, or have them assigned automatically.  You might concentrate on the spark spell, which allows for more shots as you assign it more cards.  Another nod to fans of the book are the jelly beans scattered around that function as a sort of currency in the game.  These can be easily summoned to you even on the run by using the "Accio" spell. Teamwork is a big part of Harry Potter and the Goblet of Fire.  You'll find that some spells naturally work together, and these are noted in game as "Combined Cast".  You might have Harry levitate an enemy, while Hermione shoots it with sparks, for instance.  Some objects cannot be moved unless two or more players work together, particularly some of the gates in the Hogwarts grounds.  Teaming up to put out fires quickly is another way to reward cooperation.  All these things fill up a meter that allows players to superchargetheir spellpower for a short period.  We're not talking about a massive level of co-op play here, but its enjoyable nonetheless.

If you have a little wizard fan or two running around, you should give Harry Potter and the Goblet of Fire a try.  It might be a good way to get an older non gaming fan of the series to pick up a controller, too.  This summer, the new Harry Potter movie is coming out, and the new game promisesmultiplayer of some sort.  Hopefully, this will be co-op, which worked quite well for the fourth game and is a good fit for the Potter franchise.  If there IS co-op, I got dibs on Mad Eye Moody!