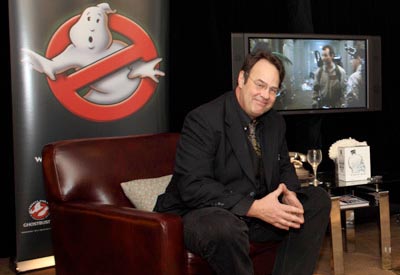 As we inch closer to the Ghostbusters game June 19th release date, publisher Atari has been unleashing more and more press coverage, trailers and information on the unsuspecting population.

The latest batch includes interviews with the OG, that's Original Ghostbuster, Dan Aykroyd, a new trailer, a walkthrough of some of the game, and a brand new edition of the game exclusive to Amazon.com.

The MTV Multiplayer blog sat down with Mr. Aykroyd to talk about his involvement in the game, as well as some personal feelings.  While he had quite a bit of involvement in the script and background of the game, he felt it was best to get out of the way of the development team and let them do what they did best, but don't worry, he was never far for guidance as needed.

According to Mr. Aykroyd the game has actually inspired Hollywood to further his push for a new movie, and they've even assembled a writing team comprised of US TV Show "Office" veterans to start work.

“But you know they were inspired by the game — I said, ‘Go see the game!’ And they watched the game and already in their story outline there are things from the game that are going to be in the movie. So it’s going very nicely. But you know, in show business, you can’t ever place your hopes that things are going to happen and so many dreams get perforated. I just had to kiss it goodbye for a long time but we got ‘Blues Brothers 2‘ made and that was a miracle. [laughs] It was a success by that measure alone.”

Next up we have a handful of trailers for you.  The first is called "Split Up" and it exemplifies Doctor Venkman's statement that even in co-op, sometimes it's better to go alone, in this case because you can do more damage.

The next trailer is a walkthrough of the Xbox 360 version of the game with a developer.

Finally we come to the end of our bountiful post of Ghostbusters info.  Amazon has revealed an exclusive limited edition of the game called the "Slimer Edition."  This package is limited to only 6500 pieces and come with a COA signed by the artist Steve Johnson.  The model is a 10.5" tall Slimer that glows translucent green hovering over the Ghostbusters firehouse sign.

Included in the Slimer Edition:

We have the pictures courtesy of GBFans.com.  The cost will set you back $129.99.