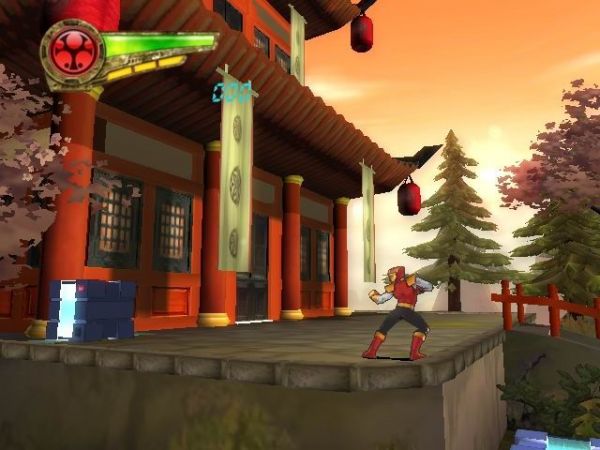 For Co-Op Casual Friday this week, we take a look at one of the most beloved kids' franchises of all time.  The TV show has been running for a decade and a half, and the toy line is one of the all time best sellers.  Mixing martial arts, colorful costumes, crazy weapons, and my favorite, giant robots, Power Rangers is a lot of fun.  Power Rangers video games have ranged from okay to terrible, but the most recent title, released for the PS2, Power Rangers Super Legends, is easily the best.

The real draw for Power Rangers Super Legends is the fact that it includes dozens of different characters pulled from all the various teams.  It is the Power Rangers equivalent of a Justice League/Avengers crossover.  From the original Red and Pink Rangers to the current (at the time) Operation Overdrive squad, most fan favorites are here.  My personal pick, the SPD Shadow Ranger (who is a dog headed alien!), appears, but the most popular Ranger ever, Tommy, is notably absent.  Many of the gigantic mechanized Megazords from the shows appear as well.  Fans of the show will find plenty to love here. Gameplay is very simple, which you'd expect from a game aimed squarely at the younger gamer.  Power Rangers Super Legends combines platforming sections with standard beat 'em up brawling.  Punches, kicks, air moves, and laser blasts mow through the enemies very effectively.  Though there are many different characters to use, they all play the same.  There is a bit of customization and an upgrade system, which helps spice up the action, which can be monotonous from time to time.

Just like in the show, at the end of every level, you fight a nasty monster.  After it is defeated in hand to hand combat, it grows to skyscraper size.  At this point, the heroes summon their own Megazords to battle the now-titanic creatures.  Attacking and defending in these sequences are quick time events, where pressing the right combination of buttons allows for an energy blast or a block.  A deeper fighting game style approach would have been better, but it's still satisfying. The co-op is just what you'd expect.  Two players can partner up at the same time to take on the bad guys.  There are no combination attacks, sadly, but old school teamwork still feels good, and you'll be highfiving and hollering just the same.  If one player gets stuck, or falls to far behind, the game warps them to the partner automatically.  Both Rangers participate in theMegazord sequences, too.  There's nothing ground-breaking here, but it's fine for what the game is.

Power Rangers Super Legends uses comic book style cut scenes for storytelling, which matches the plot and cheesiness of the dialog very well. Cel shaded characters and environments look slick, too.  The game is no masterpiece, for sure, and it is quite short, but there are things to unlock and collect that will keep you going back.  Your enjoyment of Power Rangers Super Legends is going to be dependent on your love for the show or toyline.  If there are kids you know who watch the show, they will love it.  Considering how popular Power Rangers is, even many years after its heyday, chances are you already know a fan.  Give Power Rangers Super Legends a try with them, and when their faces light up, you'll be glad you did