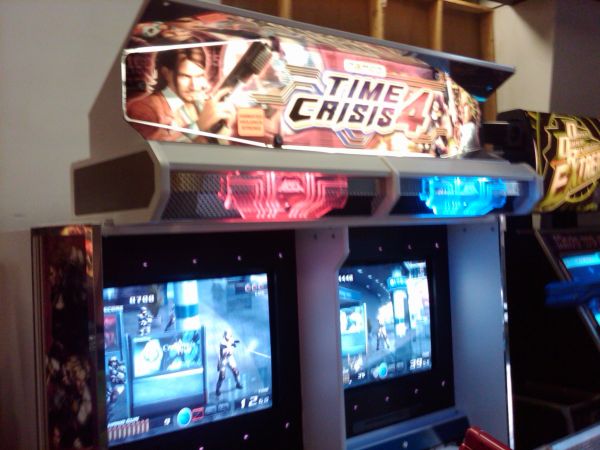 My family and I have been on vacation for just over a week now.  We've traveled from our home in Missouri to Florida, with a stop in Georgia in between.  Though I love my Nintendo DS, it just doesn't take the place of a 360 or PS3, or any game on a big screen.  So, to keep the gamer itch scratched while on the road, we've tried to hit every arcade we saw.  For Co-Op Casual Friday today, we'll take a look at the best and the worst of the games we played.  Naturally, they all feature co-op!

Our first arcade was at one of those mega truck stops you see on interstate highways.  We needed gas, and there was a Wendy's next door (I have a weakness for Double Stacks), so we pulled in and took a break.  Besides a really big aquarium filled with all sorts of colorful fish, they had an arcade!  Quickly, we dashed inside, sure that the neon "games" sign meant some co-op joy was in store.  How wrong we were!  There was a crane game, an air hockey table, a battered and faded Ms. Pac -man, and only one co-op game at all.  Invasion, it was rather unimaginatively named, and after watching the attract mode, we decided to pass on even playing it.  Generic cabinet, nondescript title, and "meh" graphics all added up to a big pass. Our next arcade was in Universal Studios Florida.  Sure, we were having a great time in the park, but the allure of games paired with air conditioning was too much to resist.  This arcade was quite a bit bigger and had a far better selection of games.  A DDR machine was pumping out some really fast paced dance music and the kid on it was keeping up really well, feet flying precisely over the arrows.  A whole row of crane games (who plays these, really?) and some novelty machines were scattered around.  Co-op was easy to find as well, and both of them were good, one maybe even great.

Our first choice was Time Crisis 4.  I didn't have much previous experience with this series, which is too bad, as it was by far the best co-op experience of the trip so far.  (Unless you count the Men In Black Alien Attack ride, which was fantastic!)  My two kids started up the Time Crisis, and soon were wading through dozens of enemy soldiers.  This game really stands out from other lightgun shooters for a couple reasons.  First of all, each player has their own screen, and though gameplay is on the rails, both players have a different perspective.  This makes for some great flanking maneuvers which add a lot to the feeling of co-op.  Also, the step lever, which pulls you into and out of cover, was a welcome addition.  It made the game seem more like a test of skill than an exercise in pouring in more tokens.  Time Crisis 4 is a definite winner, and I look forward to checking out more games in the series at home. Up next was Guitar Hero Arcade.  Like a moth to flame, I was unable to resist the appeal of the music game.  It had been a week since I had played one, you know, that means I was in withdrawal!  Frustratingly, the machine ate a token, and I was unable to get another one in time, so my youngest played solo for "Slow Ride" by Foghat.  The oldest and I teamed up for "Cult of Personality " by Living Colour.  The guitars were really heavy, likely to absorb the extra arcade damage, and they had no whammy bar.  He chose lead on Expert, and I opted for Hard bass.  It turned out that he should have picked Hard, as the difficulty level, based onGH 3, is really steep.  We failed out at 67%, much to the chagrin of a few kids watching us.  There was very little indication that we were even failing; it served to remind me how quickly the music game genre has evolved. GH3 is less than two years old, yet it felt like playing Madden '95 or something.  Guitar Hero Arcade is good for showing off, I suppose, but if you want a longer session, you'll want to play at home. That was it for the arcade at Universal, but we also checked out the Gameroom here at the hotel.  It was quite depressing for me.  Only one co-op game was there, out of about twenty machines.  A lonely Maximum Force was off all alone near one corner.  We didn't have much time, so we didn't get to play, but it was depressing seeing only the one co-op title.  The emphasis here was on gimmicky games: two player motorcycle racing, a three screen enclosed Ferrari simulator, and, again, lots of crane games.  There was a Ms. Pac/Galaga Reunion cabinet, thankfully, but that was it as far as classic games go.  I suppose this is what the modern arcade has become, in this age of high-def home consoles.  If there's not a gimmick, people probably aren't playing it. Of all the games we've played on the trip so far, Time Crisis 4 was the clear winner.  Solid lightgun gameplay, with the innovations of different perspectives and the cover system, work together for a great experience.  Hopefully, we'll cover the whole Time Crisis series in the future here at Co-Optimus.  Perhaps I'll find an even better co-op arcade game before tour trip is over next weekend.  If I do, I'll let you know!