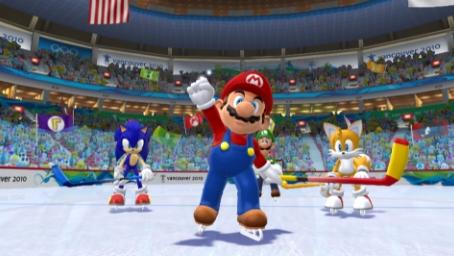 An official release date has been set for Mario & Sonic at the Olympic Winter Games, landing the four-player co-op Wii title on store shelves well in advance of the actual winter season. October 16th, you'll be free to ski and skate your heart out as your favorite character from either series, and better yet: with up to three friends!

In all honesty, we can't seem to get a good head of steam for this one just yet. The original was developed and released without much ado, and while it was met with fairly decent reviews it didn't cause any major ripples among Wii owners. That said: co-op is always better than the alternative, and we look forward to seeing if this sequel can inject new energy into the unique fledgling series.