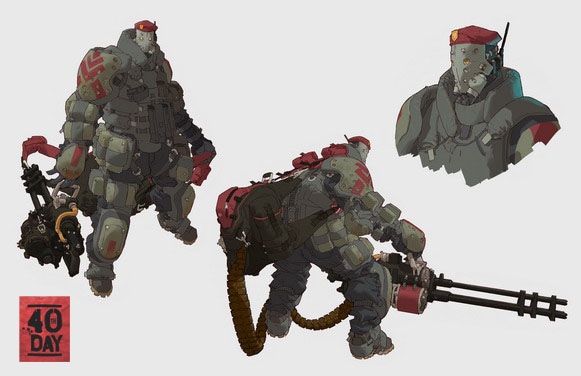 The official Army of Two: The 40th Day blog has posted an interview with Character Art Director Roderique Pralier.  In it, Pralier discusses the changes to the sequel.  In addition to several new enemies, some of the design changes for the titular duo are discussed.

Ron: From the video and screenshots that we've seen so far, some people have commented on a notable size difference between the two characters, was that something that you wanted to focus on?

Roderique: In the first game, all the characters were using the same skeleton so they all had the same size.  With Salem, we had to use a small trick; when they were both standing we would have him crouched over a bit so that he looked smaller, when in fact he was the same size as Rios...but now each character has their own skeleton and you can definitely see that the difference between Salem and Rios is huge.  Rios is a big huge guy, and while Salem is still tall, compared to Rios he almost looks small.

Seriously, does anyone want to be the scrawny guy?  Kinda like getting stuck playing as Dazzler in X-Men: The Arcade Game!  All kidding aside, there are some really interesting pics in the interview, particularly those that show Salem and Rios faces.  Could it be possible that they are even more threatening with the masks off?