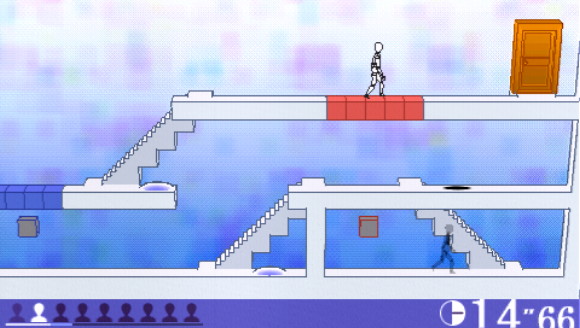 When you think of co-op, who comes to mind first? Friends, spouses, children, or parents are generally considered co-op partners. "Myself" should not have popped into anyone's head when asked who they co-op with. Sony however, would like to share a different idea of co-op. They've dubbed their new title Ecoshift a "Self Co-op" title. Somehow, we think the concept of cooperation eludes these PSP developers. Care to enlighten them?

Ecoshift will give control of two characters to one gamer, in the hopes that we really enjoy playing with ourselves.

The puzzles in this game seem to resemble what Braid did on the Xbox LIVE Arcade - In later levels, moving the main character one direction will have his shadow either follow suit or bound the opposite way. This doesn't necessarily suggestion cooperation at all, it's just puzzle solving.

While we're not sure exactly how Ecoshift will work, we're really not quite sure what to make of a game that is "Self Co-op."What do you think of this "new" type of gaming?