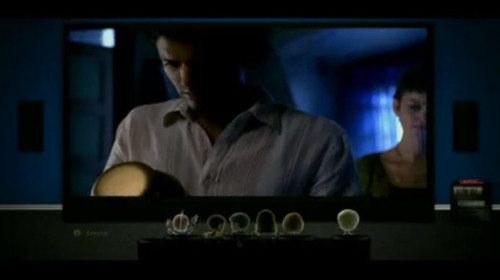 Last night we finally got to test out the new Netflix Party feature with the upcoming dashboard update.  It's an interesting concept, one that I think will go a long way if it performs as well as it did last night.

The idea is simple really - get a bunch of people together to decide on a movie and then watch it together over Xbox Live.  The set up looks a bit like Mystery Science Theater 3000, and the results will most likely end up being similar.  With your avatar parked in front of the screen, capable of emoting, well things can get just downright silly.

The first thing that happens when creating a movie party is the recommendation stage.  During this time people can browse the Netflix Instant Queue and look for a movie to watch with the part.  Their recommendation will pop up with the movie's box art for everyone to see and check out.  We noticed that Starz Play movies, unfortunately, won't be available for party streaming due to licensing issues.

The queue is broken up into categories like Action, Comedy, Anime, TV and Zombie movies.  Oh yes - zombie movies get their own category.  There's seemingly thousands of movies to choose from.  The downside is there doesn't seem to be a way to search or sort the lists, so that might be better left to using the website.

Once decided it's onto the theater (or other backdrop) where you can sit and watch the movie.  The host can pause, fast forward and rewind the show at any time - and Netflix will sync up the rest of the party so they are watching the same thing.

I can see this being a huge feature that gets pretty popular.  Those rainy saturday nights no longer require a trip to the video store, and friends you haven't seen in a while can enjoy a movie with you.  You can even have date nights over Xbox Live now to help ease those long distance relationships.