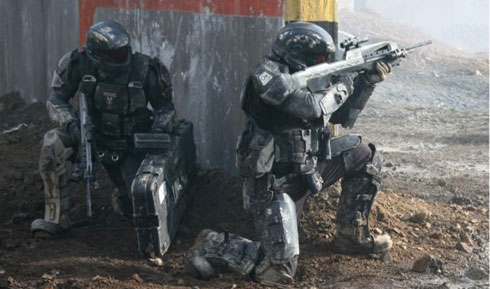 For all intents and purposes, the Halo movie was declared dead.  Peter Jackson and Neil Blomkamp's effort into bringing Halo to the big screen died in their arms due to funding and production issues.  In fact, Blomkamp has gone on record and said that even if offered - he wouldn't do the film again.  Perhaps that has opened the door then for...Steven Spielberg.

According to entertainment site IESB, Steven Spielberg has expressed interest in producing a film based on the Halo universe.  The specific story that interested him was The Fall of Reach, which was a novel written by Eric Nylund.

Stuart Beattie, who co-wrote this summer's film G.I. Joe The Rise of Cobra, penned a script based on the book earlier this year and even created some concept art to go with it.  Its this script that got Spielberg interested in the project.

So perhaps if the stars align just right, this project can finally get underway.  The rumor goes that negotiations with Microsoft are underway, and with Spielberg already on friendly terms - he was at their E3 press conference to promote Natal - chances are good an agreement could be reached.