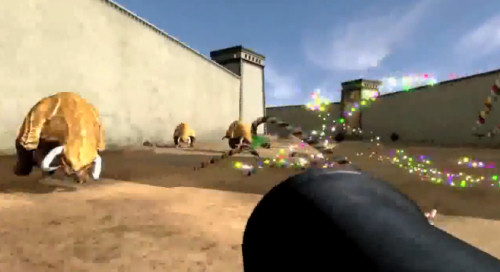 Sure Serious Sam is all about kicking ass and taking names in the name of ass kickery.  Normally Sam likes to blow his enemies into tiny bloody bits, generally making a red mess wherever he goes, and a wake of destruction behind him.

But Serious Sam HD isn't all serious, no sir-ree.  In the Super Happy Fun Time mode of the game you can disable the blood and instead of enemies explode in bunches of confetti, candy, and flowers!   Suddenly yesterday's M rated title is tomorrow's kid friendly co-op game.

Don't worry folks, the original Sam is still here. And if Eurogamer's hands on preview are anything to go by, it's the perfect game for fans of the original.

On to the graphical update then, seeing as that's largely the point. As you'll see from the shots, everything's received a full overhaul - lighting, textures, shader models, animations. Crisp and well-defined, Serious Sam loses none of its charm from the translation, retaining the original's cartoonish glory despite the sharper edges. Sam's foes are still garish and ridiculous, his surroundings functional rather than lush. Specs are yet to be finalised for the PC version, but we're promised that they're not too demanding.

What you probably want to hear is precisely the conclusion I came to: Serious Sam HD looks set to live up to its titular promise. For fans of the original, that's great news.