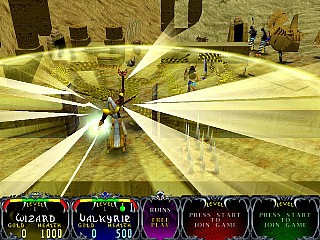 This week, due to the holiday, Co-Op Classics has been bumped up a day.  Last week, we covered the first two Gauntlet games.  Though there were a few sequels, the next real innovation to the series was Gauntlet Legends, the first 3D game in the series.  Highly successful both in the arcades and for home systems, Legends got a sequel, Gauntlet Dark Legacy, which is probably the finest game in the entire series, in my opinion. But first, let's talk about Gauntlet Legends.  More than a dozen years had passed since Gauntlet II hit arcades.  During that time, gaming had changed drastically.  Two dimensional sprites and artwork just didn't cut it anymore, thanks to the rise of 3D technology.  Old school titles had to be reinvented to keep up with the times.  Some of these transitions were highly successful, such as Super Mario 64.  Others were not so lucky (Frogger 3D, we're looking at you).  It was only a matter of time before a fantastic old school game like Gauntlet was given the three dimensional makeover, and in 1998 that's exactly what happened. 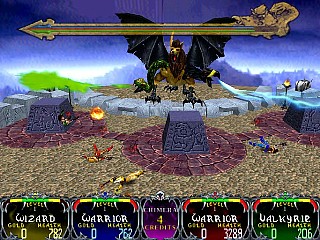 Gauntlet Legends played almost exactly like the original.  The same four classes appeared, though they were much more detailed and looked spectacular in 3D.  Most of the gameplay was retained as well, such as eating food for health and collecting magic potions and keys.  New additions like turbo attacks and the ability to use all that treasure to purchase items added a more modern polish to the game.  Some of the new items were flat out incredible; tactics like being able to breathe fire, or use an electric shield to keep enemies at bay were invaluable when slashing through hordes of bad guys.  The biggest change though, was the ability to level up your character.  As characters progressed, they became more and more powerful and gained new abilities.  Best of all, a password system allowed you to keep the same character across play sessions!  This feature was quite innovative, and sorely needed to allow an arcade game to keep folks interested, thanks to home consoles, which were becoming more powerful all the time. 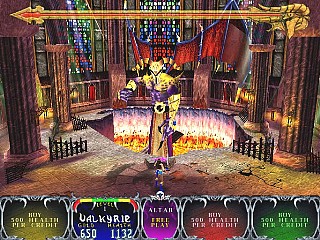 Gauntlet Legends was ported to PS1, Dreamcast, and the N64 in 1999.  Most of my experience with the game comes from playing the N64 version.  I remember you had to have the expansion pack to play a multiplayer game!  Sounds downright bizarre these days, doesn't it?  In any event, the cooperative gameplay was a quite fun; in this sense, Gauntlet Legends was at least as good as the original.  The non-linear gameplay of the original Gauntlet was retained, meaning you could choose whichever world you wanted to begin with.  A rudimentary story was added, though it was quite generic, your standard "bad guy will destroy the world" scenario.  While playing through each level, runestones had to be collected to open new areas.  At the end of each world was a boss, and these were quite memorable.  The dragon and chimera in particular were very well done.  The final boss, Skorne, was one tough cookie.  However, I must say that I felt a bit disappointed with the game.  It wasn't much of a challenge, and was fairly short.  It was still fun, but mainly due to the nostalgia factor.  There wasn't much depth here; it felt almost exactly like playing the original Gauntlet, with only a few small tweaks. 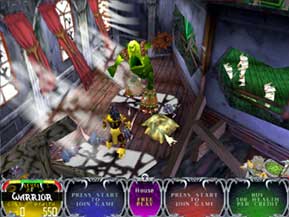 That would all change with the next game in the series, Gauntlet Dark Legacy.  More of an expansion than a sequel, Dark Legacy introduced new character classes, which were a breath of fresh air.  Knight, sorceress, dwarf, and my own personal favorite, the jester, were added to the classic foursome.  Why was the jester the best?  He tossed bombs, for one thing, and his combos were amusing, like the "batter up".  Plus, his turbo was "Hammertime"!  Each time I used it I would cry out "STOP... HAMMERTIME!" in my best M.C. Hammer voice.   Each of the new classes played similarly to one of the classics, yet they still felt quite unique.  Light and heavy attacks could be combined for some much needed variety.  Super combos could be unleashed by using turbo attacks together with another player.  In addition, each class gained a visual upgrade every ten levels, and eventually would earn a familiar, a small creature who flew around with you, acting like a double shot.  There was always something to look forward to when levelling, besides just the basic stat boosts. 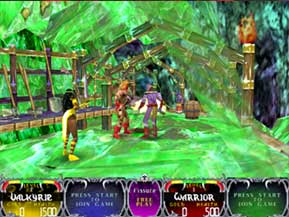 The length of the game was increased as well.  All the levels from Gauntlet Legends returned, and in addition a handful of new levels entered the mix.  The best of these, easily was the Dream World.  The look of this level was mind bending.  I must admit that it was so weird and unusual that playing through part of it gave me a headache almost every time.  IN any event, the design of the level was particularly memorable and quite challenging.  Between the new levels and all the side areas and unlockables, Gauntlet Dark Legacy didn't feel short at all; in fact, playing the PS2 version several hours a day for two weeks (while visiting family out of state), we never finished it.  There was one last runestone that we just could not get to, no matter what we tried.  You can blame the twisted diabolical Dream World designers for that!  Still though, Gauntlet Dark Legends was a great title, and in my opinion easily one of the best co-op games of the previous generation. The Gauntlet series is still going strong today.  Just three years ago, Gauntlet: Seven Sorrows was released, though it didn't really hold up to the high standards of Dark Legacy.  Nintendo's DS system will get a version of Gauntlet later this year.  The classic co-op gameplay, fantasy setting, and replayability that make all the Gauntlet games so great will likely mean we can look forward to more games in the storied series for years to come.  Perhaps twenty years from now, you may still hear "Warrior needs food... badly" coming from gamers' living rooms.